Longtime network anchor talks about his family’s Holocaust history, his views on Israel and AIPAC and lessons from US media coverage of the genocide during WWII

CNN anchor Wolf Blitzer tours the US Holocaust Memorial Museum in Washington, DC, for a special airing on the network on August 26, 2022. (Courtesy/CNN via JTA)

JTA — Growing up in Buffalo, New York, CNN anchor Wolf Blitzer always knew he was the child of Holocaust survivors. His parents, both Polish Jews, told him often about their experiences surviving the concentration camps.

“I knew many children of Holocaust survivors whose parents didn’t speak about it,” Blitzer told the Jewish Telegraphic Agency. “But my parents were very open about it. I’m grateful that they were.”

But it wasn’t until Blitzer made his new CNN special about the US Holocaust Memorial Museum that he discovered a video testimony his father, David Blitzer, had recorded in the 1990s.

Filmed at the Holocaust Documentation and Education Center in Hollywood, Florida, David Blitzer discussed growing up in the Polish city of Oświęcim, later “Germanized” into Auschwitz, where his parents were murdered. (The city is known as Oswiecim again today.)

He shared intimate details about the mindset of the Germans around him, who he said regretted that Hitler was in power “only when they started to lose the war,” and his belief that the United States’ decision not to bomb the Auschwitz death camp was a moral failure.

David Blitzer’s testimony, along with those of other survivors like Rita Kesselman and Irene Salomonawicz, is featured in the new CNN special “Never Again: The United States Holocaust Memorial Museum: A Tour With Wolf Blitzer,” which airs Friday at 11 p.m. EST.

The hour-long special, originally intended for the now-defunct streaming service CNN+, follows Blitzer and current museum director Sara Bloomfield as they explore the Washington, DC institution and the history lessons it offers. The program airs on the network less than a week after fellow Jewish CNN correspondent Dana Bash’s own special on antisemitism in the United States. It will subsequently be available on CNN’s digital platforms.

Blitzer, a 32-year veteran of CNN, previously spent close to two decades as a reporter for various Israeli news outlets and wire services, including many years in Jerusalem. He spoke to the Jewish Telegraphic Agency about drawing on his family’s Holocaust history for the special, his views on Israel and AIPAC today, the lessons he and the team at CNN have taken from the American media’s coverage of the Holocaust during World War II and his thoughts on Israeli media today.

This interview has been condensed and edited. 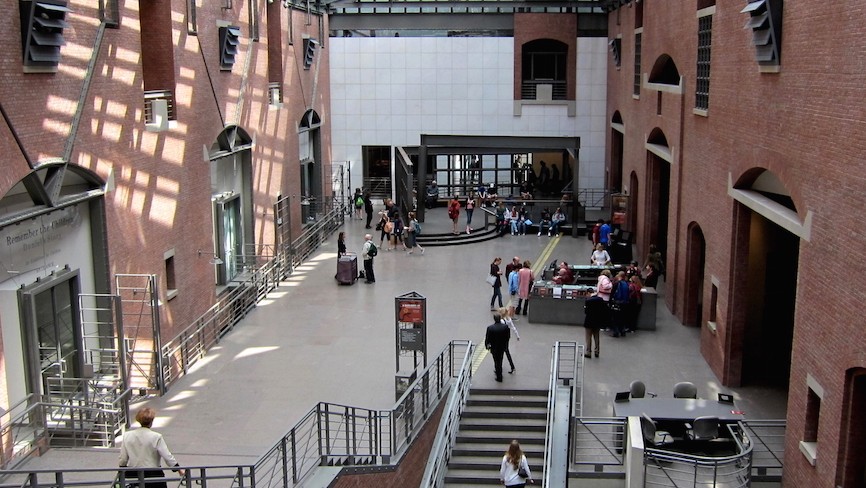 A view of the interior of the U.S. Holocaust Memorial Museum in Washington, D.C., in 2010. (Wikimedia Commons)

JTA: Tell me how this special came to be, and how you got involved in it.

Wolf Blitzer: Well, as you know, I’m the son of Holocaust survivors, so this is a very personal story for me. And I grew up in Buffalo, New York, and heard my mom and dad talk about their experiences during the war — they were pretty open with me and my older sister, so we learned all about it. All four of my grandparents, sadly, were murdered during World War II, during the Holocaust. So I never got to know them. But people always ask me, “What’s your real name?” And I say, “That was my grandfather’s name.” I was named after my grandfather: Wolf Isaac Blitzer.

A few years ago, when I was in Israel covering one of the wars in Gaza, CNN wanted some of the anchors to do a little report on their personal heritage, their history, their roots. And so of course I said yes. From Israel, I went to Poland. My parents were Polish Jews. I visited Auschwitz and visited my mother’s hometown. My dad’s hometown was Oscwiecim [where Auschwitz was located]. I actually went to those towns to prepare this report.

After you’d done this dive into your family history, how did the idea to tour the US Holocaust Memorial Museum take shape?

Well, everybody at CNN basically knew about my personal history with the Holocaust. They’d all seen my little “Roots” package. And with increasing antisemitism around the world, including in the United States, and increasing Holocaust denial that’s going around, CNN thought, “Well, maybe Wolf should do a tour of the US Holocaust Memorial Museum and show our viewers what’s going on.” People come to Washington, it’s a good place to visit and learn about the Holocaust. So it wasn’t my idea to do this documentary — some of the leadership at CNN asked me to do it.

Was this your first time in the Holocaust Museum?

No, no, no. I remember during the Jimmy Carter administration when they came up with the idea. Stuart Eizenstadt was a major domestic policy adviser to president Carter — he’s now the chairman of the museum, but he was among those who recommended that there should be a Holocaust museum in Washington. And they agreed. Eventually they decided to put it on the National Mall. I’m sure you know exactly where it is. I was the White House correspondent for CNN during the Bill Clinton administration when it was actually opened. And I was there on that day, for the official opening with [Holocaust survivor and “Night” author] Elie Wiesel and others who were there. It was just an amazing experience that the US government would put together this wonderful museum for future generations to learn about this horrible, horrible history.

It’s been interesting to see the museum figure out how to deal with this new rise in antisemitism and how to maintain a public profile and continue its advocacy for Holocaust education.

The good news is there are more Holocaust remembrance museums around the country. I was recently very proud and happy to be helping in the opening — and I didn’t go there, this was during COVID, I was Zooming in — the opening of the Birmingham, Alabama, Holocaust museum. And so they’re all over the country now. People are learning about the Holocaust. 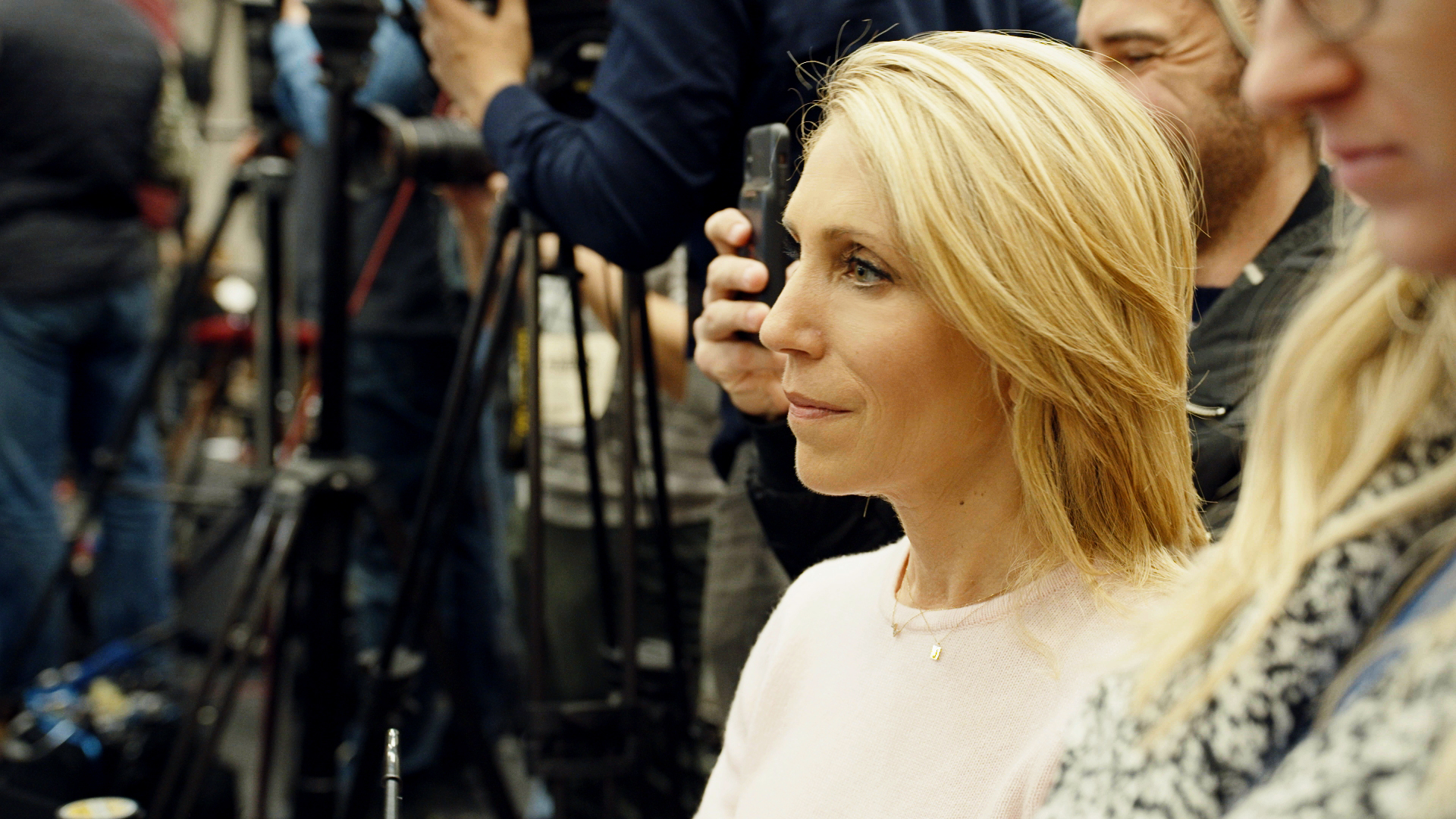 This is airing on CNN less than a week after Dana Bash’s special on antisemitism. Was that intentional, or coincidence?

I think it’s more of a coincidence. We weren’t trying to air back-to-back, but it just sort of happened. Ours was ready and we decided to release it. It wasn’t part of some coordinated programming.

This was the first time you had seen this video testimony of your father. You’re basically in conversation with him during the special. What was that like for you?

I love my dad and I miss him. And it was hard to watch him and hearing his stories about his brothers and the sisters who were killed, his parents. It’s not easy.

I’m very proud of my mom and dad. They came to America after World War II. Fortunately, in 1948, the US House of Representatives and the Senate passed what was called the Displaced Persons Act of 1948, which crafted, additionally, 400,000 immigration visas to displaced persons, including a lot of Holocaust survivors. One day my dad was in Munich and he sees this long line. And he said, in those days, you see a long line, you wait in line, because there must be something good at the end of the line. He asked the woman in front of him, “Why are we waiting in line?” And she said, “Visas.” “Visas? For what?” “America.” So my dad waited in line, and thankfully, he signed himself [and my family] up.

Within a few weeks they all got letters saying they’ve been approved to come to the United States, but they would tell you where you were going. And they told my dad, “You’re going to Buffalo.” And he said, “Buffalo, where’s that?” He didn’t know. And they said “New York.” New York! A lot of Jewish people there! He didn’t know Buffalo was 400 miles from New York City.

My mom and dad had very little money and couldn’t speak English. They were given an opportunity to settle in Buffalo and ended up doing really well. My dad became a major homebuilder in Western New York and was very proud of his success. 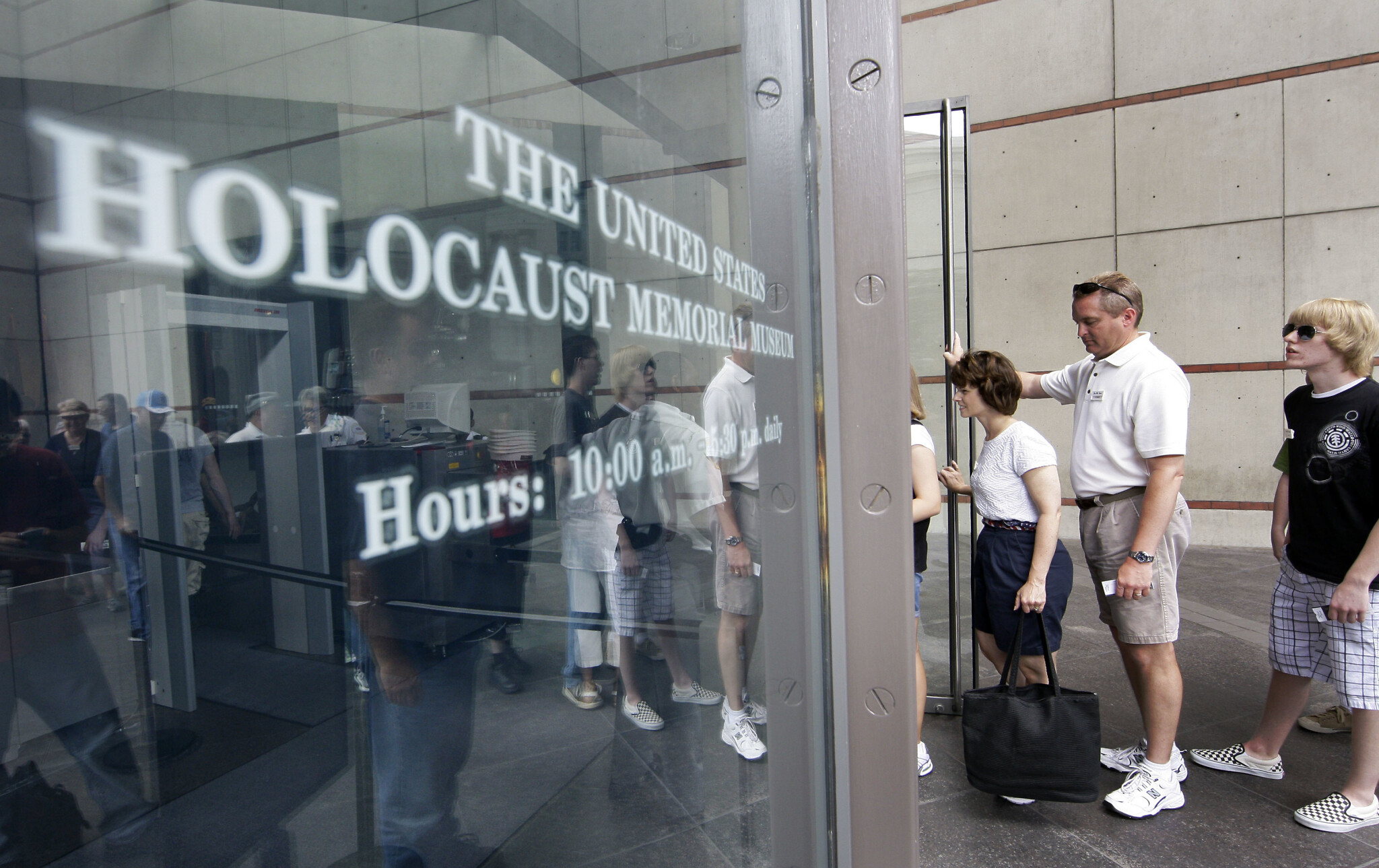 In this June 12, 2009 file photo, people line to enter the US Holocaust Memorial Museum in Washington. (AP/Alex Brandon, File)

I want to ask about the content of the special itself. As you and Sarah Bloomfield, the museum’s director, are touring, there is a large emphasis on the goriest details of mass death, particularly in Auschwitz. There’s a lot at the museum. Why focus on these specifics of the mass death operations?

I’d love to switch gears a bit. Before you joined CNN, you worked for decades as a journalist in Israel. You still cover the region regularly for the network today, as you noted. What is your feeling about coverage of Israel issues in the American media today?

I think the media does a pretty good job covering Israel right now. If you take a look at the mainstream news channels and the papers, wire services and magazines, I think Israel gets a lot of attention, a lot of good coverage. Like in any story, you want to cover the good, the bad and the ugly. Israel is a country like any other country.

If you take a look at the Israeli media, the English-language papers like the Jerusalem Post or Haaretz or Times of Israel, and the Hebrew papers, they do a really thorough job covering what’s going on in Israel. And I respect them a great deal. These are world-class journalists. 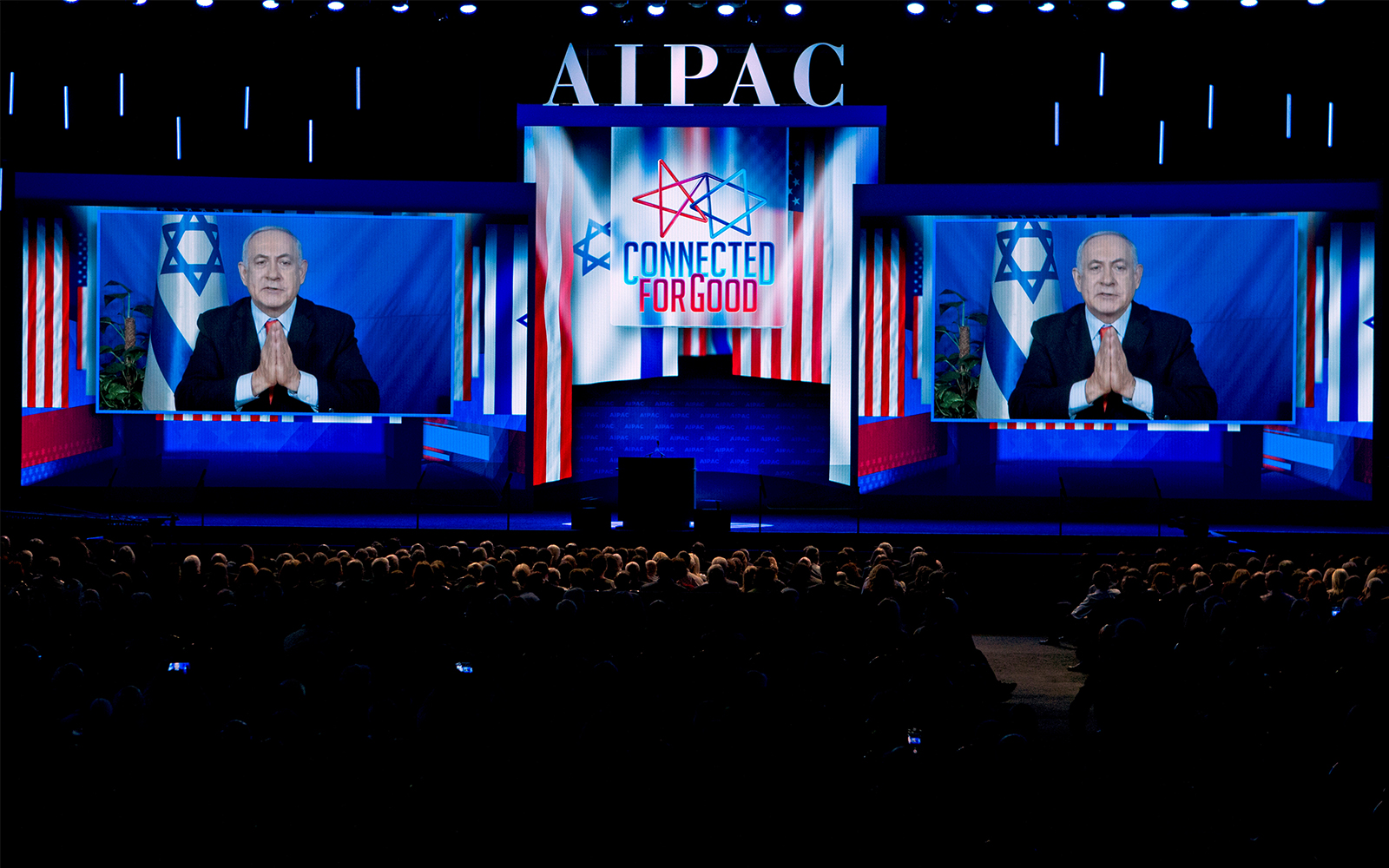 You also used to work as an editor at AIPAC. What did you make this year of the organization’s decisions to get involved in political spending for the first time in US elections, and to endorse candidates who denied the results of the 2020 election?

My feeling is just that, this is just me: let all these political action committees do what they want to do. I wouldn’t do it, but it’s not my department.

I think it has impacted me, and it’s impacted a lot of people that work at CNN. We want to make sure that when there are horrors going on in the world, wherever they’re going on — they’re still sadly going on big time right now, all over the place — we don’t ignore those stories, and we report them. And CNN has done an amazing job over these years. I’ve been with CNN now for 32 years. And making sure that when we go to Asia or Africa or Europe or wherever, South America, and if there’s horrible things going on, we want the world to know what’s going on. And we do that.

Over the last decade, CNN has had a lot of different leadership changes, but for a while it was really known as the “both sides network.” Is that philosophy something that can hold when you’re covering atrocities like you’re talking about?

When we’re dealing with a horrible issue like a massacre, genocide, or Holocaust, we never do both sides. We never took a look at, “Well, look at the Nazis, why were they killing all these Jews?” In politics it’s one thing. But when you’re dealing with atrocities, it’s not both sides.

Politics lead to atrocities, though, don’t they?

Politics can lead to atrocities, yes. But once atrocities are happening, it’s not a two-sided story.