11 yachts, including four belonging to Roman Abramovich that together are worth more than $1 billion, reportedly docked along Turkey’s coast

Turkey has become the go-to location for some sanctioned Russian oligarchs seeking to store their yachts, including Abramovich, who currently has four yachts — whose total worth is over $1 billion — docked in Turkish ports, according to The Daily Mail, echoing similar claims made by the Turkish Daily Sabah earlier this month.

Citing Turkish media, the report said most of the staff managing Abramovich’s boats left when the sanctions came into effect because their salaries were not paid. Some, however, stayed behind. 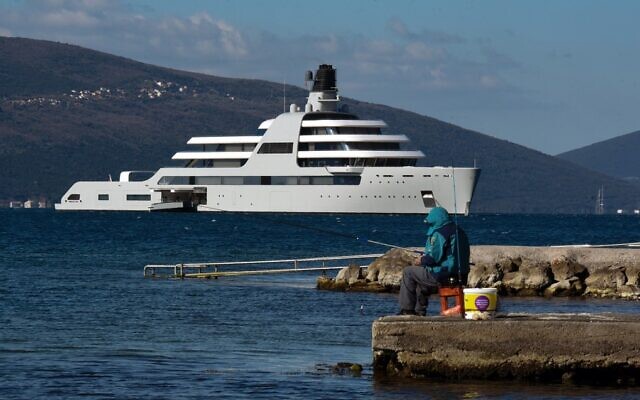 Superyacht Solaris, owned by the Russian oligarch Roman Abramovich, which is under UK sanctions, sails towards the luxury yacht marina Porto Montenegro, near Montenegrin city of Tivat, on the Adriatic coast, March 12, 2022. (SAVO PRELEVIC / AFP)

The report cited residents and local businesses voicing mixed feelings about the issue.

“Of course, these yachts are a problem. Firstly they are anchored at sea and are obstructing small boats like ours. We cannot go near them as it triggers their alarm systems,” Sukru Aydin, 54, who works as a tour boat operator in Gocek, was quoted as saying.

Others, however, said the Russian yachts bring in business.

“Of course, we have more Russians compared with last year. They are here because you want to take away their possessions,” said Zeynep Ketenci, a boutique clothes shop owner.

NATO member Turkey — on good terms with both Moscow and Kyiv — has tried to remain neutral in the Ukraine conflict and refused to join international sanctions against Russia.

Over the weekend, Ankara seemed to downplay the threat of sanctions that Washington has warned will follow if Turkey continues to do business with sanctioned Russians.

On Twitter, Turkey’s Finance Minister Nureddin Nebati told business owners that the US threat should not “cause concern in our business circles,” adding: “Turkey is one of the most important political and economic power centers in the world.”

During the early stages of the war in Ukraine, Israel tried to adopt a similar strategy of neutrality, refraining from publicly condemning Russia for its aggression and avoiding imposing sanctions on oligarchs, partly due to its strategic need to maintain military cooperation with Russia in Syria.