Analysis Rule of law and corruption

What will be Europe’s next move against Viktor Orbán’s Hungary ?

For years now, the Hungarian government of Prime Minister Viktor Orbán has been locked in a struggle with the European institutions in Brussels. Europe’s patience is tested but in the context of the divisive war in Ukraine, will it dare to curtail Hungary’s access to EU funds? 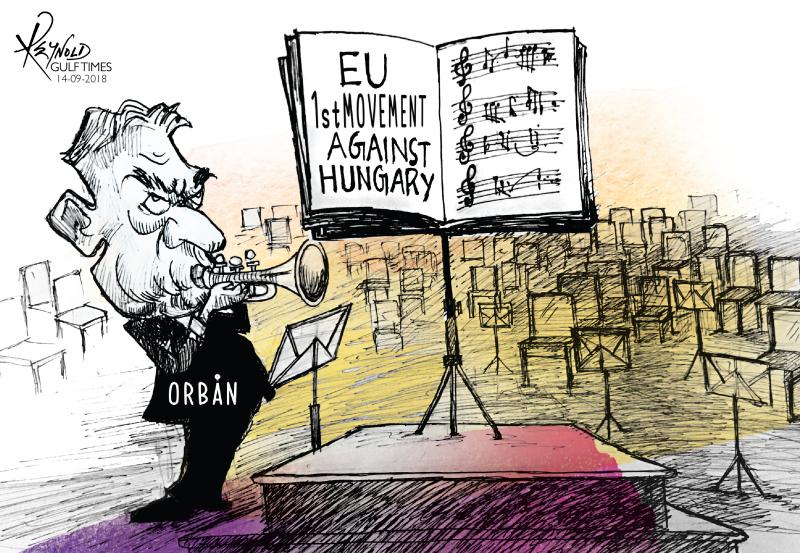 The Hungarian government’s critics can cite a long list of grievances: restrictions on raising LGBT issues in schools, weakening independence of the media and judiciary, and misuse of EU funds.

The Hungarian leader Viktor Orbán is unimpressed by such arguments. Continuously in power since 2010, his Fidesz party won a fourth parliamentary majority in April this year. Although the government had been fearful it could lose this time, Fidesz actually strengthened its position, winning 52.5 percent of the vote and just over two thirds of seats in Parliament.

More : In Hungary, Ukrainians find a warm people but a frosty state

The authors of the Bertelsmann Foundation’s 2021 report on sustainable governance in Hungary however faults the Fidesz government for having created an unfair electoral playing field. The opposition was hobbled by reduced funding to their political parties, a weakening of municipalities (which contain several opposition bastions), tightening political influence over the media, and increased censorship by criminalizing “fake news” and scaremongering.

But from Orbán’s perspective, his government’s legitimacy had been confirmed yet again, boasting in his election-night speech that he had a won “a victory so big you can see it from the moon – and from Brussels.”

This puts the European institutions in an awkward situation as they consider whether to cut off Hungary’s access to EU funds. A newly-created “rule of law mechanism” enables the EU to withdraw funding from misspending countries. Eurocrats had withheld from using those powers, perhaps not to be seen to be interfering in Hungary’s election.

What’s more, the European Commission still has to decide whether to approve Hungary’s post-COVID economic plan and provide almost €17 billion in grants and loans from the Next Generation EU recovery package. The Bertelsmann report worries that the EU’s post-COVID funds could end up “enriching [the government’s] cronies” while constraining future governments’ fiscal room for manoeuvre.

The EU institutions now have a delicate task of navigating two imperatives: that of respecting the will of the Hungarian people and protecting the interests of the broader constituency, namely all of the Union’s 447 million citizens.

EU seeks clamp down on funds being sidelined by corruption

In particular, the European Commission serves all EU taxpayers by “protecting the Union budget against breaches of the principles of the rule of law affecting its sound financial management or the protection of the financial interests of the Union.” In plain English: regardless of Fidesz’s electoral victory, the EU executive cannot tolerate EU funds falling to corruption and lining the pockets of party men.

However, critics argue that Hungary’s strong economic performance and the confidence of investors show that corruption is hardly a debilitating problem and that corruption may be more severe in other EU countries in the region.

In any event, a decision as momentous as withdrawing EU funding from a country is eminently political. With EU funding entailing net transfers of equal to around 2 percent of Hungarian GDP, this is no small change for the central European country, but represents billions of euros and a substantial portion of public spending.

While the Commission alone can block Hungary’s recovery funds, a general withdrawal of EU funding would require the support of a supermajority of national governments representing 55 percent of EU states and 65 percent of the population. This means it will be virtually impossible without the support of at least one large western European member state.

A classic Brussels compromise may be in the offing. “There are indications that the Hungarian government is willing to take steps in this direction as Minister Gergely Gulyás announced earlier this month that the government accepts certain conditions,” said Zsuzsanna Vegh, an associate researcher at the European Council on Foreign Relations (ECFR). “However, it is highly debatable whether these will be more than cosmetic changes.”

In triggering the rule of law mechanism in April, European Commissioner for Budget and Administration Johannes Hahn, had announced that the withdrawal of funds would be “strictly proportionate to the impact of the breach on the (European) Union’s budget.” This would seem to suggest a brutal cut-off of funds is unlikely.

More : A propaganda machine at the service of Viktor Orbán

The issue is marred in broader ideological and geopolitical disputes. At least as far back as 2014, Orbán has argued that he attempted to build an alternative to Western liberal democracy. As he said in a landmark speech to the Hungarian minority in the Transylvanian spa town of Băile Tușnad: “The Hungarian nation is not a simple sum of individuals, but a community that needs to be organized, strengthened and developed, and in this sense, the new state that we are building is an illiberal state, a non-liberal state.”

Orbán’s vision then can perhaps be compared with the model of illiberal democracy in Singapore, which also has communitarian and familialist overtones. Both Hungary and Singapore have pushed to raise fertility rates, strongly supported heterosexual families, and sought to prevent changes to the ethnic mix in their respective countries.

Perhaps the most significant difference with Singapore involves its zero-tolerance approach to corruption. The same cannot be said for Hungary.

Geopolitically, the issue has been complicated by the practical matter of having to retain Hungary as a constructive EU member state, particularly since Russia’s invasion of Ukraine in February. Orbán was partly re-elected on a “Hungarians first” message, seeking to preserve Hungarians from involvement in the war and from its negative consequences, notably on energy prices.

The Orbán government is likely to veto every major EU initiative – whether sanctions on Russia, an EU corporation tax, or eventual reform of the EU Treaties – until Hungary is no longer in the Commission’s financial crosshairs. EU sanctions on Russian oil were only passed by de facto excluding Hungary from them.

Czechia, which holds the EU’s rotating presidency for the second half of this year, may take a conciliatory line. In an op-ed in Politico, Czech Prime Minister Peter Fiala stressed that he saw the diversity of opinions within the EU as a strength and that the Czech presidency would “always try to consider carefully all the views expressed in discussions”.

This may prove difficult. Recently, Orbán stoked outrage among many at home and abroad in a speech claiming that Hungarians “do not want to become a mixed race” and that multicultural west European countries are “no longer nations.” He also called for peace talks between Kyiv and Moscow, reducing military aid to Ukraine, and moving away from sanctions against Russia.

More : How George Soros was transformed from herald of democracy into Hungary’s “enemy of the people”

For all this, the EU is highly unlikely to suspend Hungary’s voting rights outright – that would require unanimity of all 26 other states – and Fidesz will almost certainly remain in power for at least another four years. Some kind of modus vivendi will have to be found which respects the will of the Hungarian people, protects European taxpayers, and does not paralyze the EU as a geopolitical actor.

In a world marked by war in Ukraine, energy dependence on Russia, and a sometimes unstable U.S.A., division is a luxury Europe cannot afford.