This summer has been a glimpse into Europe’s hot, dry future 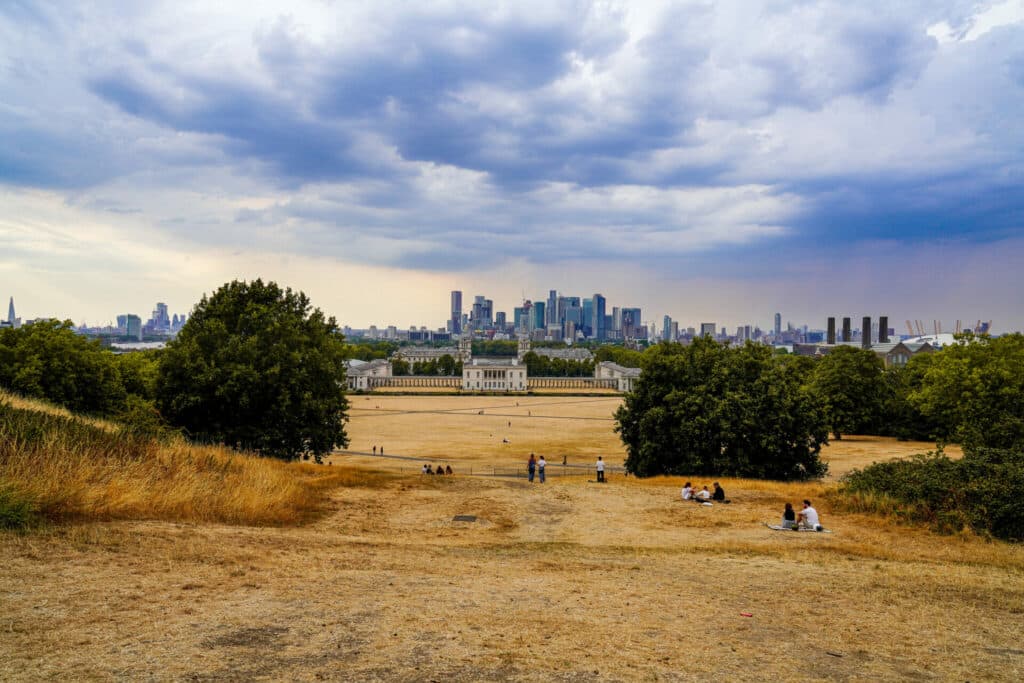 The summer of 2022 has been exceptionally warm across most of Western Europe. After one of the warmest and driest Mays since the 1960s, no less than three major heat waves struck the continent, in mid-June—Europe’s earliest heat wave on record—then again in mid-July and during the first two weeks of August. Temperatures regularly soared above 40 degrees Celsius (104 degrees Fahrenheit), even reaching an astounding 47 degrees Celsius (116.6 degrees Fahrenheit) in Portugal on July 14. Temperatures remained between 5 and 10 degrees Celsius (41 – 50 degrees Fahrenheit) above average for days on end. Countless records were broken, even shattered by wide margins, as in the United Kingdom and the French region of Brittany.

Sweltering temperatures led to thousands of excess deaths across Germany, the United Kingdom, Spain or Portugal, and caused computer systems to crash at two major London hospitals. Passenger traffic was upended as train tracks and roads buckled and some airport runways melted under the heat. Alpine glaciers and permafrost have been melting at a record, alarming rate, forcing the closure of many climbing routes and even triggering a glacier collapse in Italy that killed eleven people.

To top it all, much of Europe has been in the grip of a powerful drought, the worst in at least 500 years, that has wreaked havoc on natural ecosystems, crops, and many sectors of the economy. Water use has been severely limited in many countries, with drinking water having to be trucked in to more than 100 towns in France. Many European rivers are hitting record low water levels, with major implications on crop and power production, and fluvial shipping. Italy’s Po River, whose basin accounts for 40 percent of the country’s agricultural production, shrunk significantly, jeopardizing the rice harvest. The Loire in France could be crossed on foot in places, while the Rhine fell so low that shipping had to be severely reduced, causing important supply issues in Switzerland and Germany. High river temperatures have forced power plants to lower production and also lowered oxygen levels, threatening fish populations. Stored water volumes in reservoirs are particularly low in Portugal, Spain, France and Italy, limiting hydropower production. Yields of major crops are expected to fall by at least 10-20 percent due to precipitation deficits and water restrictions, while livestock culls may soon occur as farmers already tap into their winter food supplies. Falling river levels have also led to saltwater intrusions near the coasts that further threaten agricultural production. The combination of drought and high temperatures has created ideal temperatures for wildfires. As of August 27, 740,000 hectares had been lost to the flames across the European Union, about three times the average for this time of year. Spain, Portugal, Romania and France have been particularly hard hit.

Summer heat waves have been becoming more frequent and intense in Europe, and at a much faster rate than at comparable latitudes. There was one in 2003, 2010, 2015, 2018, 2019, and now 2022; the list of heat wave summers is growing longer rapidly, and it seems that the continent may literally be turning into a “hotspot.” Climate change is blamed for this recent trend, but what makes Europe, especially its southern half, a “hotspot” for climate change?

Wet and dry extremes on the rise, but flash floods no reprieve from long-term drought

Europe’s proximity to the Mediterranean is where the story starts. The Mediterranean stands out in climate change projections as a place where climate models agree that winter and spring precipitation is likely to decline significantly. These trends, as we argue in a recent paper, are due to a combination of two specific and robust mechanisms: first, changes in the large-scale atmospheric circulation following a shift in the pattern of what scientists call stationary waves, and second, a weakening of the land-sea temperature contrast in and around the Mediterranean as temperatures rise more over land than they do over sea. These two processes bring about anomalous high surface pressure over the Mediterranean Sea. The associated clockwise circulation near the surface brings hot and dry air from the Sahara towards Morocco and southwestern Europe. In spring, this pattern caused by climate change shifts northward resulting in more frequent dry springs over southern Europe. Winter and spring drought then sets the stage for a positive feedback loop: dry soils in early summer indeed reduce surface evaporation and water availability, as well as atmospheric instability, thus favoring summer droughts and heat waves.

Observed conditions during this past winter and spring, and the current summer are consistent with this picture. Warm and dry conditions have prevailed around the Mediterranean since winter. In southwestern Europe and northwestern Africa, drought set in as early as January after significant precipitation failed to arrive for more than a month. Persistent dry conditions, coupled with early heat waves in May and June, led to extremely dry soils in early summer across the whole of Europe. By early summer, the Iberian Peninsula, Morocco and Algeria were suffering from a 1-in-a-1000-year drought. The situation was especially dire as water was already in short supply, following three years with low rainfall. The warm and dry winter also led to a severely reduced mountain snowpack, on which major rivers like the Rhine and Po usually rely during summer.

The 2022 European heat waves were exceptional in magnitude and duration, and would have been highly unlikely without human-caused climate change. Still, with further warming inevitable as long as greenhouse gas concentrations continue to rise, in less than a couple of decades, the 2022 summer might become the norm. That Europe, one of the most developed regions on the planet, is already struggling to withstand today’s extreme summer climate, should raise a glaring red flag—that the time for mitigating emissions and adapting to climate change is now or never.