Standing next to an F-35 fighter jet, Lapid issues warning to Iran: ‘Don’t test us’

On visit to airbase, PM says too early to know if nuclear deal has been stopped; if Iran continues to pose threat, he adds, ‘it will discover Israel’s long arm and capabilities’

Prime Minister Yair Lapid said Tuesday it was too soon to know if Israel had succeeded in thwarting the emerging nuclear agreement between world powers and Iran, which it sees as harmful.

Lapid, who was on a visit to the Nevatim airbase in southern Israel, which houses the Israeli Air Force’s fleet of advanced F-35 fighter jets, also issued a warning to Iran.

“It is still too early to know if we have indeed succeeded in stopping the nuclear agreement, but Israel is prepared for every threat and every scenario,” Lapid said in a brief statement in front of an F-35.

“If Iran continues to test us, it will discover Israel’s long arm and capabilities. We will continue to act on all fronts against terrorism and against those who seek to harm us,” he said.

“As [US] President [Joe] Biden and I agreed, Israel has full freedom to act as we see fit to prevent the possibility of Iran becoming a nuclear threat,” Lapid added.

Israel has been pressuring the US not to reenter the 2015 nuclear accord. A senior defense official said last month that Israel had two main issues with the emerging deal: the so-called sunset clause, which would lift limitations on Iran’s nuclear program when the accord expires; and sanctions relief that would allow Iran to increase funding to its proxies.

Biden took office aiming to revive the deal, which was abandoned in 2018 by his predecessor Donald Trump, who unleashed a volley of fresh sanctions on the cleric-run state.

The European Union put forward on August 8 what it called a final text. Iran proposed changes to it — largely accepted by the Europeans — to which the US issued a response through the mediators, saying it was “not constructive,” and on Monday, Iran complained that it had not yet received an official US response. 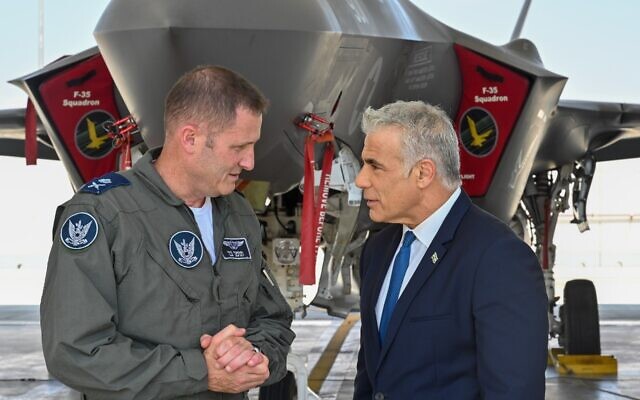 The European Union’s foreign policy chief Josep Borrell, who is shepherding attempts to save the suspended Iran nuclear deal, said Monday that the recent exchanges left him “less confident.”

“The last interaction is not converging, it is diverging. The whole process is in danger,” he said.

Israel has meanwhile pushed the US to prepare a military option against Iran, and US President Joe Biden said in July that he would be prepared to use force if necessary to prevent Iran from obtaining a nuclear weapon.

Iran’s nuclear program is believed to be too advanced to be taken out with one strike and it is unclear how much damage a military attack would be able to do.

Lapid’s statement came as the chief of the Mossad spy agency, David Barnea, was in Washington for a series of meetings “designed to explain to the American government our position regarding the dangers inherent in the agreement,” according to the Prime Minister’s Office.

Israel has long opposed the deal, arguing that Iran is seeking to build a nuclear bomb, and has published intelligence it says reveals the Iranian weapons program. Iran has denied any nefarious intentions and claims its program is designed for peaceful purposes, though it has recently been enriching uranium to levels that international leaders say have no civil use.