Google and Amazon employees are pressuring their companies to drop a $1.2 billion cloud computing project that they believe will harm Palestinians. 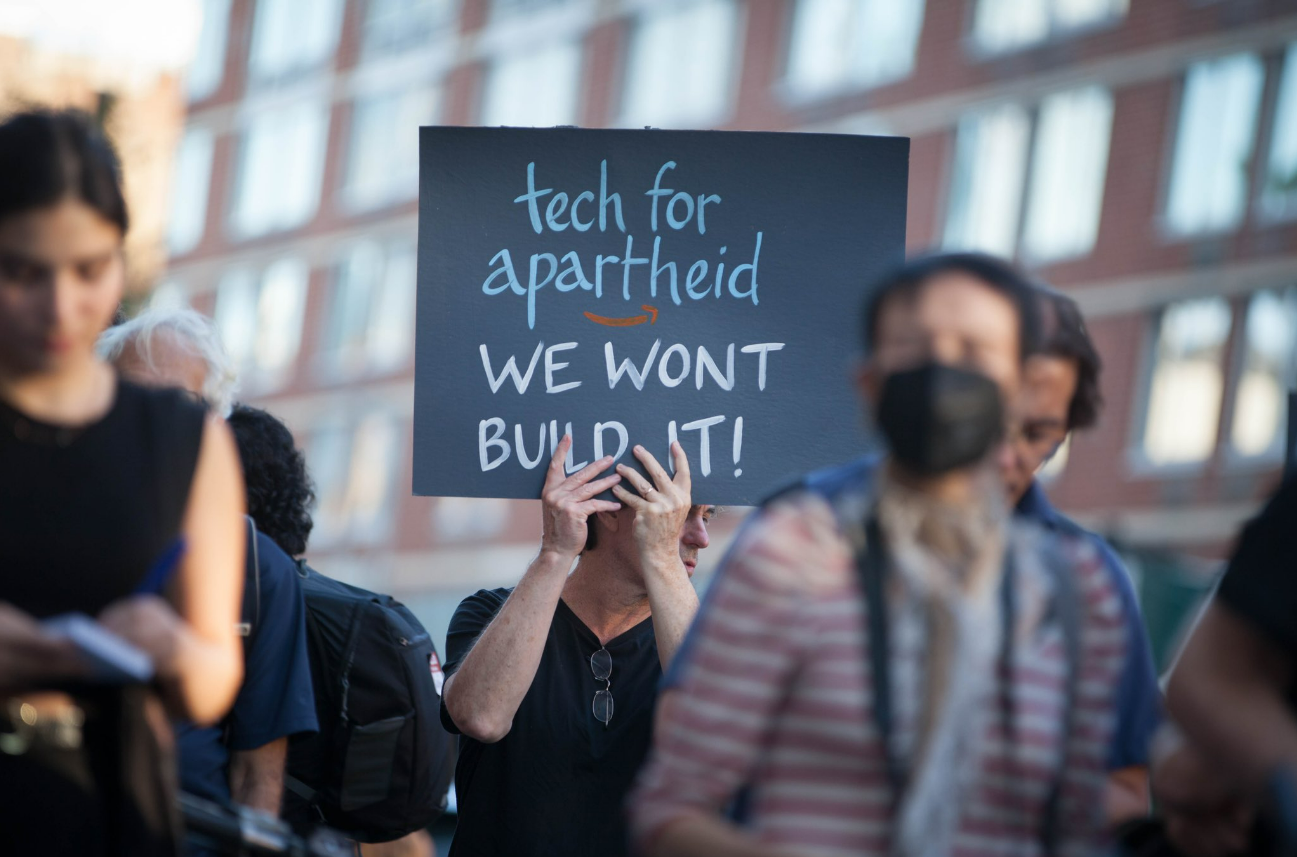 Hundreds of community members and workers across four cities gathered to protest Project Nimbus, a $1.2 billion contract between Google, Amazon, and the Israeli government and military, on Thursday.

“There can be no tech for war. No tech for apartheid,” Alex Hanna, director of research at the Distributed AI Research Institute, expressed to a crowd of demonstrators led by Amazon and Google tech workers.

While the cloud-computing project has been hailed as a “game changer” for Israel, activists have feared that it will lead to data privacy issues, especially if utilized by the Israeli military to further the surveillance and data collection of Palestinians.

Google’s own internal documents suggest that Project Nimbus would allow the Israeli government and military to use “facial detection, automated image categorization, [and] object tracking” that workers believe will be used to fuel Israeli apartheid.  According to a report from The Intercept, Project Nimbus provides Israel, including the Israel Defense Forces, with advanced artificial intelligence technology that could be used for the digital surveillance of occupied Palestine territories.

Google has been expanding its defense contracts, despite objections from its workers. In the Guardian, Google workers stated that “These contracts are part of a disturbing pattern of militarization, lack of transparency and avoidance of oversight … We cannot look the other way, as the products we build are used to deny Palestinians their basic rights, force Palestinians out of their homes and attack Palestinians in the Gaza Strip.”

Rallying around the slogan #NoTechForApartheid, tech workers, led by ex-Google worker Ariel Koren, organized the collective Workers Against Nimbus to oppose the project. Koren, who resigned from Google because of an alleged pattern of retaliation and silencing of Palestinian, Arab, Muslim and anti-Zionist Jewish people, has publicly criticized Project Nimbus because of her concern that the technology will be used to surveil and harm Palestinians.

Earlier this year, hundreds of employees signed an internal petition demanding that Google end its alleged retaliation against Koren. In response to Koren’s resignation, 15 workers against the project, who remained anonymous in fear of retaliation, told their stories about their experiences working at Google and its alleged culture of fear and repression.

In response to Koren’s forced resignation, tech workers organized a national day of action to escalate pressure on their companies to drop the contract. The protesting tech workers were joined by Jewish Voice for Peace, the Athena Coalition, the Adalah Justice Project, AROC: Arab Resource & Organizing Center, ACRE Action Center on Race and the Economy, and the Alphabet Workers Union.

We’ll send you a weekly email with the latest articles.

The workplace protests are just the latest action by Google workers since the company announced the contract in 2021 in the midst of some of the worst violence in the Israeli-Palestinian conflict since 2014.  The contract itself was signed the same week that the Israeli military attacked Palestinians in the Gaza Strip, killing nearly 250 people. Workers have circulated petitions, spoken to media and sent an internal letter, signed by more than 250 people, to Google CEO Sundar Pichai demanding that he put out a statement condemning the Israeli attacks against the Palestinian people.

Bathool Syed, an Amazon worker, stated in a press release from Google & Amazon Workers Against Project Nimbus that, “There is no way for Amazon and Google to justify a contract with a government that has violated numerous human rights and continues to oppress Palestinian lives. As workers, we are powerful and are sending a clear message that we do not want our labor to power violence.”

Organizers are hopeful that the #NoTechforApartheid protests will push their companies to drop the computing contract and agree to the demands sent to Google’s executive team to reject future defense contracts, fund relief for Palestinians, protect their worker’s freedom of speech, and affirm the companies’ commitment to human rights principles.

Zane McNeill is the founder of the DEIJ organization, Roots DEI Consulting and Policy, and co-manager of the labor rights group, Rights for Animal Rights Advocates (RARA). They have published anthologies on anti-carceral veganism and queer and trans liberation with PM Press, Sanctuary Press, and Lantern Publishing and Media. They are also a contributing writer with Sentient Media and Law@theMargins.