Two forensic technicians dig near a cross in a forest on the outskirts of Izyum, eastern Ukraine on September 16, 2022, after Ukrainian forces recaptured the eastern city from the Russians. (Juan Barreto/AFP)

IZYUM, Ukraine (AFP) — Ukraine said Friday it had counted some 450 graves at a site near Izyum after recapturing the strategic eastern city from the Russians, a discovery that Kyiv likened to atrocities seen in Bucha and Mariupol.

Ukrainian officials said some 450 graves had been counted at a single site near Izyum.

“This is just one of the mass burial sites discovered near Izyum. In the occupied territories, rampant terror, violence, torture and mass murders have been reigning for months,” senior presidential aide Mykhaylo Podolyak said.

The United Nations in Geneva said it wanted to send a team to determine the circumstances of the deaths.

At a location near Izyum, AFP journalists saw graves topped with crosses and marked with numbers, with one inscription reading: “Ukrainian army, 17 people. Izyum morgue.” 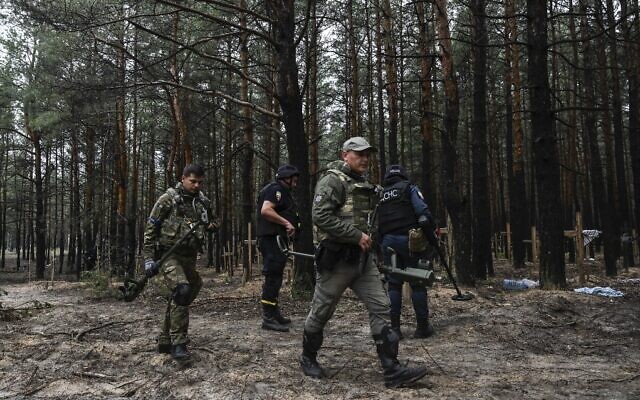 Ukrainian servicemen search for land mines at a burial site in a forest on the outskirts of Izyum, eastern Ukraine on September 16, 2022, after Ukrainian forces recaptured the eastern city from the Russians. (Juan Barreto/AFP)

Russia has been accused of carrying out attacks on civilians that amount to possible war crimes, particularly in towns outside the capital of Kyiv.

Dozens of civilians bearing signs of extrajudicial killings were found in places like Bucha, outside Kyiv, after they were recaptured by Ukraine’s forces earlier this year.

The grim discoveries have coincided with fresh developments on the international front, including a White House announcement of a new package of up to $600 million in military aid for Ukraine.

Since Russia invaded Ukraine in February, the United States has provided Kyiv with more than $15 billion in military support, including long-range precision rocket systems.

This photograph taken on September 16, 2022, shows an abandoned Russian tank at a gas station on the outskirts of Izyum, in the Kharkiv region, eastern Ukraine on September 16, 2022, after Ukrainian forces recaptured the eastern city from the Russians. (Juan Barreto/AFP)Germany was ready to take on a leading role in ensuring Europe’s security, Scholz said, vowing to turn the country’s armed forces into the “best equipped” on the continent.

Haunted by two world wars, Germany has always trod lightly and quietly on the world stage when it comes to conflicts and armament.

European Commission chief Ursula von der Leyen on Thursday visited Kyiv for discussions with Ukraine’s leaders about “getting our economies and people closer.”

“You’ll have your European friends by your side as long as it takes,” von der Leyen told a news conference with Zelensky.

Kyiv gained European Union candidacy status in June, angering Moscow which has tried to retain political and military influence since the collapse of the Soviet Union three decades ago.

Many EU members have joined the US in supplying Kyiv with advanced weapons, enabling its forces this month to push the Russians out of thousands of square kilometers (miles) of territory. 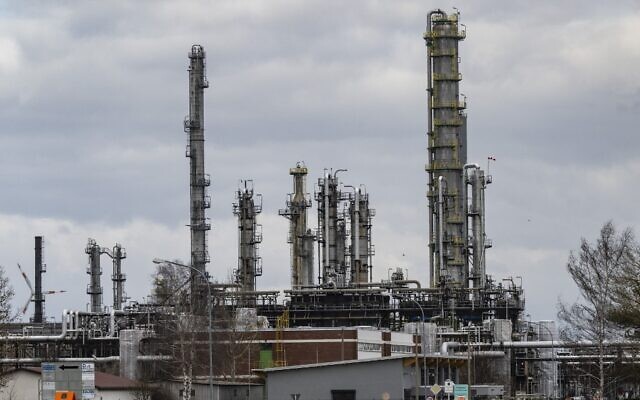 This file photo from April 2, 2022, shows the PCK Industrial Park which houses the PCK Oil refinery, one of the Rosneft’s German subsidiaries, just outside Schwedt, some 110 kilometers north of Berlin, northeastern Germany. (John MacDougall/AFP)

Berlin on Friday took control of the German operations of Russian oil firm Rosneft to secure energy supplies disrupted by the invasion.

Rosneft’s German subsidiaries, which account for about 12 percent of oil refining capacity in the country, were placed under trusteeship of the Federal Network Agency, the economy ministry said. 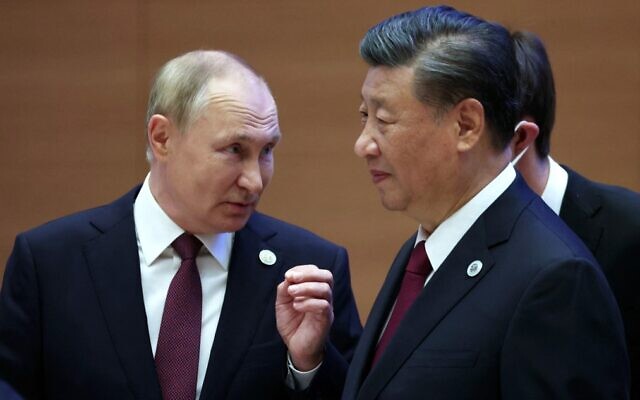 Putin and Chinese leader Xi Jinping meanwhile called for a shake-up of the world order as they met with Asian leaders for a summit challenging Western influence.

Putin hailed what he called the growing influence of “new centers of power” at the meeting of the Shanghai Cooperation Organization (SCO) in ex-Soviet Uzbekistan.