Shoigu is also going to appeal to the #Russians

The Kremlin is now signalling its plans to absorb the partly occupied regions of Luhansk, Donetsk and Kherson before Russian troops are kicked out. Staged so-called “referendums” will be called on Sept. 23-27.

Before #Ukraine liberates them, Russia’s now rushing to hold referendums in occupied Kherson, Donetsk & Luhansk. The same type of referendum Russia held after it invaded #Crimea.

“We thought we would never get out alive.” #Ukraine‘s recapture of the city of Izyum has brought multiple allegations of atrocities under Russian occupation. Among the growing accounts, a group of Sri Lankans held captive for months, tell their grim story

Fingers crossed. In light of yet more Russian war crimes discovered in #Ukraine, another classic from

RUSSIA  IN RETREAT! Russia  withdrew submarines from Crimea to Krasnodar Territory due to the threat of strikes, says British  intelligence, saying is due “to the strengthening of Ukrainian  long-range strike capabilities.”

Sham ‘referendums’ will not change anything. Neither will any hybrid ‘mobilization’. Russia has been and remains an aggressor illegally occupying parts of Ukrainian land. Ukraine has every right to liberate its territories and will keep liberating them whatever Russia has to say.

The #Russian national judo team was suspended from the world championship

The reason for the removal is military aggression against #Ukraine. The championship will be held from 6 to 12 October in the capital of #Uzbekistan, Tashkent.

The Russian State Duma adopted amendments on imprisonment for up to 10 years for voluntary surrender, tougher punishment for desertion, as well as on the introduction of the concepts of “mobilization”, “martial law”, “wartime” into the Criminal Code of the Russian Federation.

Moscow stock market plummeted after the puppeteered calls of the occupied territories on the Kremlin to hold referenda with a view to incorporating them into Russia’s territory Picture: Andriy Tsaplienko Telegram channel

102-year-old Ukrainian helps to make camouflage suits for Ukrainian defenders. The woman survived the WWII, Holodomor, forced resettlement in Donbas, but she did not see such cruelty as the Russian invaders are doing now. #RussiaInvadedUkraine Suspilne Zhytomyr

The referendum will take place from 23 to 27 September.

“Head” of the Luhansk “people’s republic” (“LPR”) has signed a law on a referendum about joining the Russian Federation, reports Russia’s

How many more mass graves have to be opened up so the democratic world supplies Ukraine will all weapons necessary to *win* the war? More than 400 dead ppl found in Izyum. What will we see in Kherson? Many bodies from Mariupol will never be found as they are already destroyed 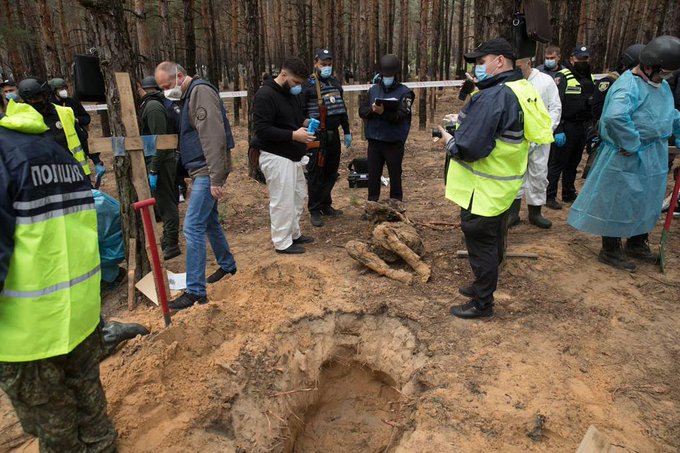 Belarus, Cuba, Nicaragua, Russia, North Korea, Syria and Eritrea voted against the UN decision to grant the exclusive right to speak via video link at the High Level Week to Ukrainian President Volodymyr Zelensky. 101 countries voted for the decision, another 19 abstained.