One demonstration in Tehran sees some 30 women remove their headscarves while chanting ‘Death to the dictator!’ as passing cars honk in support

Iranian students remove their headscarves in protest after the death of Mahsa Amini who had been detained by the country’s morality police, in Tehran, Iran, October 12, 2022. (Twitter)

DUBAI, United Arab Emirates (AP) — Iran suffered a “major disruption” in internet service Wednesday as calls for renewed protests again saw demonstrators on the streets weeks after the death of a 22-year-old woman who had been detained by the country’s morality police, an advocacy group said.

The demonstrations over the death of Mahsa Amini have become one of the greatest challenges to Iran’s theocracy since the country’s 2009 Green Movement protests. Demonstrators have included oil workers, high school students and women marching without their mandatory headscarf, or hijab.

NetBlocks, an advocacy group, said that Iran’s internet traffic had dropped to some 25% compared to the peak, even during a working day in which students were in class across the country.

“The incident is likely to further limit the free flow of information amid protests,” NetBlocks said.

Despite the disruption, witnesses saw at least one demonstration in Tehran by some 30 women who had removed their headscarves while chanting: “Death to the dictator!” Those cries, referring to Iran’s Supreme Leader Ayatollah Ali Khamenei, can result in a closed-door trial in the country’s Revolutionary Court with the threat of a death sentence.

Passing cars honked in support of the women despite the threats from security forces. Other women simply continued with their day not wearing the hijab in a silent protest, witnesses said. Demonstrations also occurred on university campuses in Tehran as well, online videos purported to show.

Lawyers also peacefully demonstrated in front of the Iran Central Bar Association in Tehran, chanting: “Woman, life, freedom” — a slogan of the demonstrations so far. The video corresponded to known features of the association’s building. A later video posted by activists purported to show them fleeing after security forces fired tear gas at them.

Videos also purported to show demonstrations Wednesday in Baharestan, just southeast of the city of Isfahan, as well as in the southern city of Shiraz and northern city of Rasht on the Caspian Sea. Gathering information about the demonstrations remains difficult amid the internet restrictions and the arrests of at least 40 journalists in the country, according to the Committee to Protect Journalists.

Iran’s government insists Amini was not mistreated, but her family says her body showed bruises and other signs of beating after she was detained for violating the Islamic Republic’s strict dress code. Subsequent videos have shown security forces beating and shoving female protesters, including women who have torn off their hijabs.

“Some of these persons are elements of [the] enemy and if they are not, they are in [the] direction of the enemy,” Khamenei said. 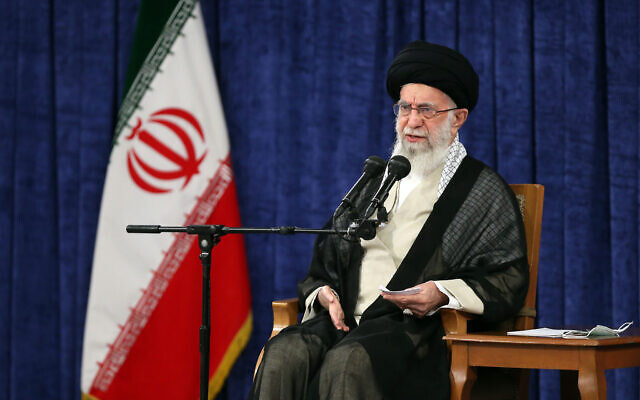 Supreme Leader Ayatollah Ali Khamenei speaks in a meeting with members of the Expediency Council, in Tehran, Iran, October 12, 2022. (Office of the Iranian Supreme Leader via AP)

Iranian state television, long controlled by the country’s hard-liners, aired footage it described as women protesting in support of the mandatory hijab across Iran. Only Afghanistan and Iran mandate the hijab in law and by force.

Anger has been particularly acute in western Iran’s Kurdish regions, as Amini was Kurdish. On Wednesday, a Kurdish group called the Hengaw Organization for Human Rights showed images of closed shops and empty streets in some areas, describing it as a strike by shopkeepers. The group also posted a video it said came from Amini’s hometown of Saqqez, which showed truckloads of riot police moving through the city.

While the demonstrations have focused on Amini’s death, anger has been simmering in Iran for years over the country’s cratering economy. Sanctions over Tehran’s nuclear program have seen a collapse in the country’s rial currency, wiping out the savings of many.

It remains unclear how many people have been killed or arrested so far in the protests.

An Oslo-based group, Iran Human Rights, estimated Wednesday that at least 201 people have been killed. This includes an estimated 90 people killed by security forces in the eastern Iranian city of Zahedan amid demonstrations against a police officer accused of rape in a separate case. Iranian authorities have described the Zahedan violence as involving unnamed separatists, without providing details or evidence.

Numerous videos have emerged of riot police shooting into crowds, with some likely using live fire. Apparently feeling the pressure from the public, Iran’s police chief, Gen. Hossein Ashtari, claimed on state television Wednesday without providing evidence that “counterrevolutionary groups abroad” wore police uniforms and fired into the crowds. He claimed his officers had made arrests of some of those people.

Meanwhile, Iran’s Education Minister Yousof Nouri offered the first confirmation that school-age children had been arrested amid the protests. He declined to offer a figure for those arrest, the pro-reform newspaper Shargh reported, only saying those detained had been put “in a psychiatric center,” not in jail.