A fire is seen at Evin Prison in northern Tehran, Iran, on October 15, 2022. (Screenshot: Twitter, used in accordance with Clause 27a of the Copyright Law)

Flames and smoke rising from Tehran’s Evin Prison had been widely visible Saturday evening, as nationwide anti-government protests triggered by the death of a young woman in police custody entered a fifth week.

In online videos, gunshots and explosions could be heard in the area of the prison.

The blaze was extinguished after several hours and no detainees escaped, state media said.

State media said the fire broke out after a fight between prisoners, in an apparent attempt to distance the events there from the ongoing protests. Hundreds are being held at Evin, where human rights groups have reported repeated abuses of prisoners.

State media originally reported nine people were injured but on Sunday, the Iranian website Mizan.news said four inmates died of smoke inhalation and 61 others were injured. It said all four who died were in prison on robbery convictions.

Ten inmates were hospitalized, with four of them in serious condition, Mizan reported. It said some prisoners had tried to escape but failed.

State TV on Sunday aired video of the fire’s aftermath, showing scorched walls and ceilings in a room it said was the upper floor of a sewing workshop at the prison.

“This fire was caused by a fight between some prisoners in a sewing workshop,” said Tehran Gov. Mohsen Mansouri. “The workshop was set up to create jobs” for prisoners, he said.

Iran’s state-run IRNA news agency reported Saturday that there were clashes between prisoners in one ward and prison personnel, citing a senior security official. The official said prisoners set fire to a warehouse full of prison uniforms, which caused the blaze. He said the “rioters” were separated from the other prisoners to de-escalate the conflict.

This photo provided by Islamic Republic News Agency, IRNA, on Sunday, Oct. 16, 2022, shows a building following a fire on the property of Evin prison in Tehran, Iran. (IRNA via AP)

The official said the “situation is completely under control” and that firefighters were extinguishing the flames. Later, Tehran prosecutor Ali Salehi said that calm had returned to the prison and that the unrest was not related to the protests which have swept the country for four weeks.

IRNA later reported nine people had been injured, without elaborating. It published a video showing burnt debris scattered around a building, with firefighters spraying down the blaze’s embers.

The US-based Center for Human Rights in Iran reported that an “armed conflict” broke out within the prison walls. It said shots were first heard in Ward 7 of the prison. This account could not immediately be corroborated. 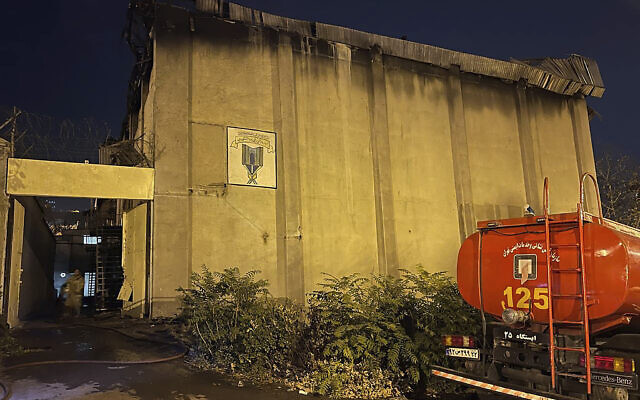 A charred building is seen after a fire on the property of the Evin prison, in Tehran, Iran on October 16, 2022. (IRNA via AP)

Footage of the fire circulated online. Videos showed shots ringing out as plumes of smoke rose into the sky amid the sound of an alarm. A protest broke out on the street soon after, with many chanting “Death to the Dictator!” — a reference to Supreme Leader Ayatollah Ali Khamenei — and burning tires, the videos showed.

Witnesses said that police blocked roads and highways to Evin and that at least three major explosions were heard coming from the area. Traffic was heavy along major freeways near the prison, which is in the north of the capital, and many people honked to show their solidarity with the protests.

Riot police were seen riding on motorbikes toward the facility, as were ambulances and firetrucks. Witnesses reported that the internet was blocked in the area.

The prison fire occurred as protesters intensified anti-government demonstrations along main streets and at universities in some cities across Iran on Saturday.

Human rights monitors reported hundreds of dead, including children, as the movement concluded its fourth week.

A picture obtained by AFP outside Iran, shows people gathering next to a burning motorcycle in the capital Tehran on October 8, 2022. (AFP)

The protests erupted after public outrage over the death of 22-year-old Mahsa Amini in police custody. She was arrested by Iran’s morality police in Tehran for violating the Islamic Republic’s strict dress code.

US President Joe Biden, on a trip to Oregon, said the Iranian “government is so oppressive” and that he had an “enormous amount of respect for people marching in the streets.”

The facility has long been known for holding political prisoners as well as those with ties to the West who have been used by Iran as bargaining chips in international negotiations.