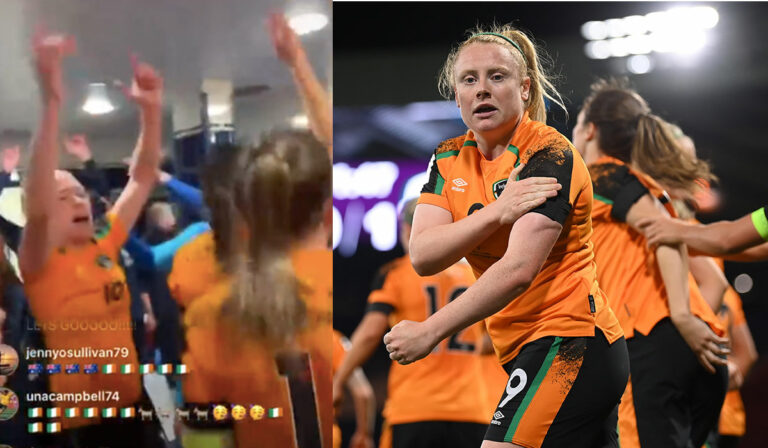 Unofficially on behalf of the Football Association of Ireland and the Republic of Ireland women’s national team, WWN is sorry you made such a huge deal out of a silly song every man woman and child on this island ends up singing at weddings, as it’s a song that’s buried in our DNA and is just a bit of craic and not meant to be sang with malice.

Clearly there was a mistake made after the match last night, whereby someone uploaded the video to social media not realising how hypersensitive the world has gone lately and how much people are willing to chastise young women who are doing well for themselves.

In hindsight, the well-known republican ballad which is part of Irish culture for decades should not have been sung after beating Scotland, instead it should have been kept for when Ireland thrash England in the World Cup, you know, because that song wouldn’t have been written if it wasn’t for England colonising Ireland for hundreds of years while purposely allowing two famines to kill off a large majority of its population. So again, sorry for that, petals.

We are extremely sorry that the childish chant hurt your sensitive little hearts, and we hope you show the same attention when it comes to corruption in the sport or when billionaire Russian oligarchs and Saudi Princes buy entire football clubs despite their country’s questionable backgrounds and human rights practices. In fact, I’m sure you will all fight that corner too if such a case ever arises.

We also hope you pay the same attention to Women’s Football from now like you did the last few days – let’s see you keep that up.

Furthermore, we expect similar type Sky News interviews from Rob Wotton when speaking to male players accused of sexual assault who pay off or threaten accusers with financial ruin, or indeed covering the daily racism players receive from ‘fans’  – maybe educate Rob on the real issues in football or get him to sing the lyrics to Rule, Britannia! and Land Of Hope And Glory. We won’t hold our breath.

From the bottom of our hearts, we are so truly sorry you’ve chosen this high-spirited, albiet misjudged celebration as your target this week which has left the players involved crying in their bedrooms instead of celebrating their incredible success. Well done on making young women the target again for what is essentially a nursery rhyme.