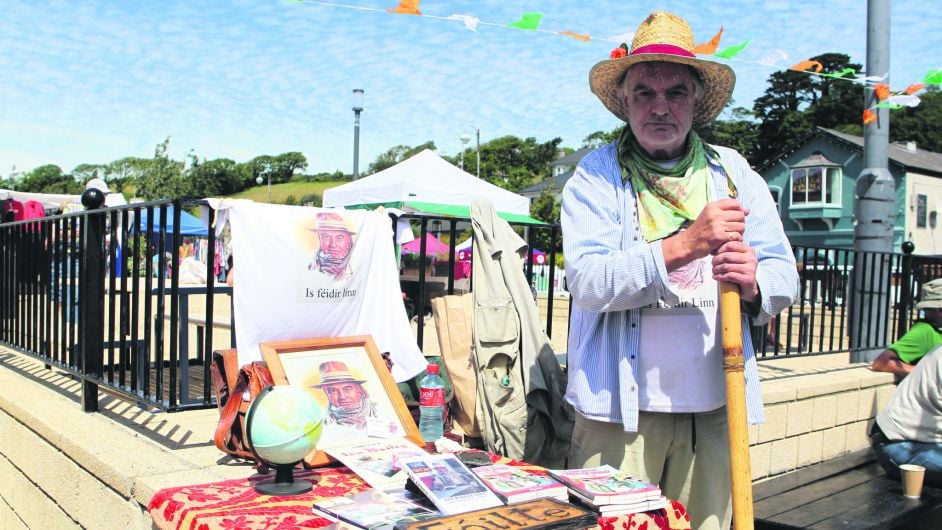 Ian Bailey selling t-shirts with an image of his face in Bantry Friday market in July. He is ‘fully contesting’ his conviction for drug driving, dating back to 2019. (Photo: Carlos Benlayo)

AN appeal by Ian Bailey for a drug driving conviction and possession of drugs has been adjourned yet again after a court heard that it could take ‘up to half a day’ to hear the case.

At last week’s Cork Circuit appeals court sitting in Clonakilty, Mr Bailey’s barrister Alan O’Dwyer BL told Judge Helen Boyle that the case could take half a day to hear, as his client was fully contesting the charge.

Due to the long court list and the availability of witnesses, she adjourned the case for mention to the December 6th sitting of Cork Circuit appeals court, sitting in Bandon.

It is then hoped that a date will be fixed in the New Year for a full hearing of the case.

Mr Bailey, with an address at the Prairie, Lisscaha in Schull, who appeared in court last week, was given a one-year driving ban and a €700 fine at Bantry District Court in May of last year, after he was stopped at a garda checkpoint in Schull on August 25th 2019. He was convicted of three charges – simple possession of cannabis, drug driving and the possession of cannabis at Bantry Garda Station, while a charge of having cannabis in his car was dismissed.

The case was due to have been heard earlier this year, but was adjourned to October so that members in charge of Bantry Garda Station who were on the duty on the day of offence would be available to attend.