Ukraine needs drones. Air, surface and underwater. Professional and amateur. For reconnaissance purposes and other tasks.

, ambassador for #united24 and the #armyofdrones, reiterated this in an interview with Piers Morgan. #dronate

Russia’s decision to hold a special military operation was largely impacted by Kiev’s threats to resume its nuclear program, Deputy Secretary of the Russian Security Council Dmitry Medvedev wrote on his VKontakte page:

“Gentlemen, we interfered, we are interfering and we will interfere,” said Yevgeny Prigozhin, who has been accused of running a “troll factory” to influence the outcome of votes in several Western countries.

Influential Russian businessman Yevgeny Prigozhin, who is linked to President Vladimir Putin and sanctioned by Washington and European countries, admitted on Monday to interfering

More than 8 years and 8 months into Russia’s war against Ukraine, hundreds of western business continue working in Russia, through their taxes sponsoring the Russian war machine and its terrorist strikes on Ukrainian infrastructure. Here are the top-50: 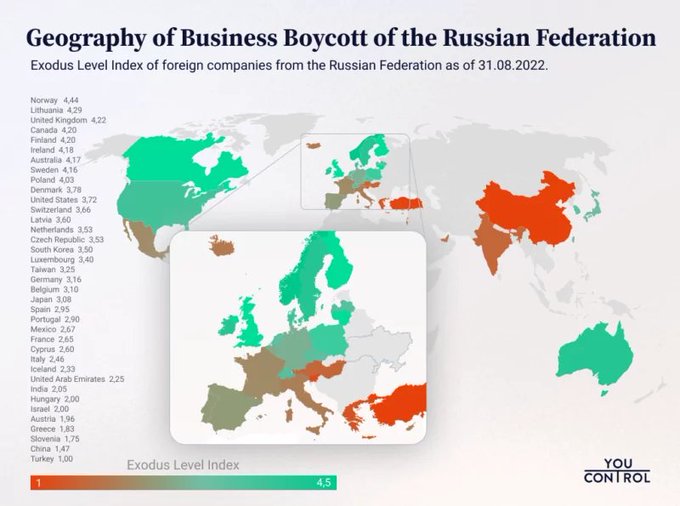 “There is no specific ideology or philosophy behind the Kremlin. They are tossed between different ideas: from Soviet internationalism, chauvinism, nationalism,” a powerful diagnosis by Mikhail Khodorkovsky

. Find out more in the next #RuZZiaUnmasked video.

Next round of cleaning. Hate symbols are being removed from the information stand about Ukrainian culture.

The grain corridor, established in accordance with the Black Sea Grain Initiative, helped stabilise the food prices, as Ukraine (one of the largest wheat exporters) has managed to export 10 billion tonnes of grain from its blocked ports since 1 August.

novayagazeta.eu The Kremlin diet How Russia blackmails the whole world with hunger and why the grain deal is still under threat: Novaya Gazeta Europe takes a close look

An associate of the President of the Russian Federation Vladimir Putin, his “cook” Evgeniy Prigozhin admitted that he influenced the course of the elections in the United States of America.

babel.ua Media: “Putinʼs cook” Prigozhyn admitted that he influenced the elections in the USA The associate of Russian President Vladimir Putin and founder of the PMC Wagner Yevgeny Prigozhin admitted his interference in the American elections.

#Ukraine: The 79th Air Assault Brigade of Ukraine destroyed a Russian T-72B tank during recent fighting in the East.

Yevgeny Prigozhin, “Putin’s chef” and founder of the Wagner Group private military company, has been strengthening his position in the Russian Federation;he wants to punish Sergei Shoigu,the RU Defence Minister because of the defeats of RU occupiers on the battlefield in Ukraine.

Odesa is a Ukrainian city! In the center of the city stands a monument to the Russian empress Catherine II. This allows Putin to say that this is like a Russian city and is waiting for  troops’ arrival. But it is not so! Now the monument is being prepared for dismantling.

Most maps of the Russo-Ukrainian War are misleading and only show areas still under Kremlin control. This map offers a more realistic impression of the war and reflects how Ukraine has already succeeded in liberating around half of the land occupied by Russia since February 2022

Russian propagandist Tigran Keosayan claims that a nuclear state, especially one like Russia, cannot lose a war. In his opinion, the main thing is for the state leadership to decide to use nuclear weapons. #StopRussianAggression #RussiaIsATerroristState

Civilian trucks with Iranian license plates have been spotted coming into the underground hangars of the “Kurskatomenergoremont” nuclear power enterprise in the village of Ivanino, Kursk oblast near the border with Ukraine for the last few weeks.

independent.ie US spies say North Korea may be trading old artillery shells for Russian horses Trade between Russia and North Korea resumed for the first time since 2020 last week — with Moscow sending 30 thoroughbred horses by train, amid reports Pyongyang has been covertly supplying ar ============

: “International companies which remain working in Russia are directly funding #RussianWarCrimes and genocide of #Ukrainians. I reiterate my call on their customers and partners to boycott these brands until they stop making blood profits and pull out of #Russia”

Why Does Joseph Stalin Matter?