Over the course of the past 24 hours, Russia has lost another 530 soldiers, 6 tanks and 19 armoured combat vehicles. 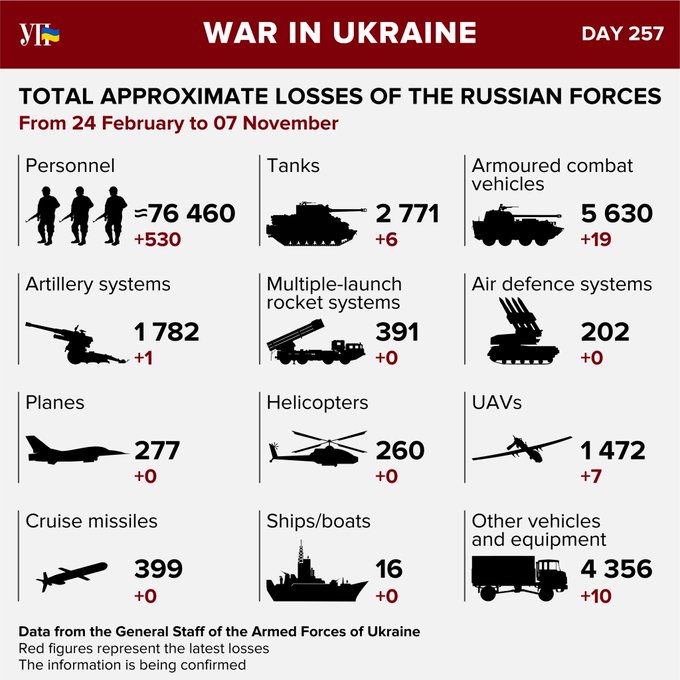 The exhumation work at the mass burial site in the Izyum Forest has been completed. Out of 447 bodies, 30 had marks of severe torture. Several men had been castrated. – 215 women – 194 men – 5 children – 22 Ukrainian soldiers

Thinking about dogs check out PATRON…Medal after Medal. He is a working dogs sniffing out landmines…

Christmas Gifts from Ukraine, from Dzyga’s Paw! We prepared 100 Christmas boxes for our supporters worldwide to celebrate Christmas together! Donate any amount over 500$, and fill a form https://forms.gle/eV33LJsdv5S9sCcx7

to claim your present!

In this thread I’ll be discussing  genocide in Ukraine. I’ll focus on the child abductions & will be providing evidence that  has planned this for a long time and that their intent has been announced in the state-owned media at least since the beginning of April, 2022. 1/10

Russian state TV presenter Ruslan Ostashko: “Over the course of the special military operation, the warriors of the Wagner group have become genuine symbols of military valour!”

In this thread I’ll be discussing  genocide in Ukraine. I’ll focus on the child abductions & will be providing evidence that  has planned this for a long time and that their intent has been announced in the state-owned media at least since the beginning of April, 2022.

British PM Rishi Sunak is preparing to announce a major gas deal with US – The Telegraph Talks on “energy security partnership” are in the final stages, with the US planning to sell Britain billions of cubic meters of gas next year.

Putin may join G20 summit virtually – Reuters According to the President of Indonesia, Joko Widodo, Putin will participate in the G20 summit “if it is possible.”

reuters.com G20 host Indonesia says Putin may seek to join summit virtually Russian President Vladimir Putin will join next week’s G20 leaders summit “if the situation is possible”, his Indonesian counterpart and the meeting’s host said on Tuesday, adding that Putin could…

The West’s sanctions against us “are very powerful, and their impact on both the Russian and global economies should not be downplayed; it will be impossible to fend them off.” – Elvira Nabiullina Head of the Central Bank of Russia

On the flight from Warsaw  to Vilnius , the person sitting next to me was reading the same book as I! I asked to take a picture so I could send it to the authors,

. I think the answer to the book’s title is definitively “YES!” What do you think?

As you commute to work this morning – be happy you are not stuck on the public transportation systems of Russia .

“We are all [rooting] for the war to stop. That’s why on Feb. 24 the military operation started,” one speaker said.

Imagine hosting a representative of this blood-thirsty regime in Ireland. Oh wait, his name is Masoud Eslami and he is here showing no remorse and in fact lying about I.R. of Iran’s murderous crimes in Iran and in Ukraine. #SanctionIran #ExpelEslami

227 members of the 290-seat Parliament in Iran have called on the Judiciary to issue death sentences for people arrested during the ongoing uprising. They want to execute innocent protesters who chanted Woman Life Freedom. The world must stop this act of terror. #MahsaAmini

Russia is “hoping to draw out the war as long as possible in order to get the west to cave. They’re not able to win on the battlefield, that’s now been shown… and so they’re going to try to win through this combination of propaganda and attrition,” says historian

It appears Russia is preparing for a “battle of propaganda, as well as a battle” in Kherson, Sky News hears. Defence analyst Professor Michael Clarke updates us on the latest with the war in Ukraine. https://trib.al/Rx0iR33

The fact that  has moved on from Nazis to Satanists as a rationale for invading  shows what nonsense the “denazification” narrative was in the first place. But it still needs calling out. Wilfully redefining Nazism is dangerous. Pretty antisemitic too. Ironically.