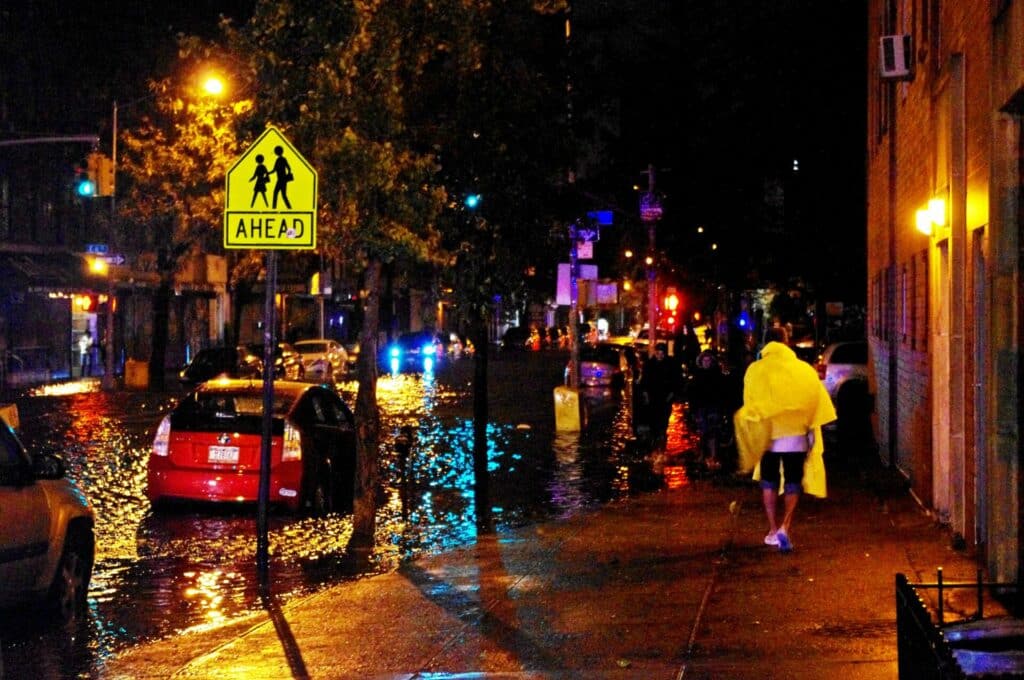 Flooding on Avenue C during Hurricane Sandy, moments before a fire at a power substation knocked out power to parts of lower Manhattan. (David Shankbone/Wikipedia, CC BY 3.0)

A decade ago, Hurricane Sandy changed New York City, forever. New Yorkers now viscerally understand our vulnerability in a way we didn’t before, and the barriers being built to protect us from future storms and sea level rise will reshape the city’s topography. But for me—a scientist who studies hurricanes and climate change, a New Yorker, and a human being—Sandy was a different kind of watershed moment.

In the weeks and months after Sandy, I spoke to the media frequently for the first time in my life. The following year, I wrote a book aimed at nonscientists about what happened and what I thought it meant. I gave a lot of public talks, and met many different kinds of people. At the same time, and in the years after, I began interacting with colleagues in the insurance industry. These may seem like superficial changes, but they also initiated a shift in my research focus, and thus in my scientific identity.

I began to think harder than I had before about the value and purpose of the science I had been doing up to that point. For years, I had dedicated myself to basic research whose goal was to better understand the atmosphere’s behavior from first principles. I had always believed that such understanding had value—beyond that inherent in understanding the universe for its own sake—in its relevance to human society. This relevance in turn was made material through a democratic political system that valued science and other form of expertise. That didn’t feel like enough any more. A few colleagues and I began doing more applied work, on extreme weather risk, with a more explicit orientation towards human outcomes. Then, Donald Trump’s election in 2016 made faith in US democracy much harder to sustain, and gave a painful new jolt to my self-examination.

I’ve described my experience over the last few years to colleagues, students, and friends as a “midlife crisis,” but I’ve come to see that what I’m experiencing is broadly shared among climate scientists of all ages. The youth climate movement has pointed an accusing finger at my generation in particular, asking where we have been all our lives. Some people can justify inaction on climate by ignorance or other priorities in their lives; as a scientist who studies the problem up close, I had no such excuse.

I always thought of global warming as terribly important, intellectually. But I hadn’t done a great deal about it other than write scientific papers. Like many other climate scientists, I thought my role was to narrow uncertainties in projections of climate change so that I could better inform decision makers. To be more specific, I thought my work would make its way into IPCC reports and National Climate Assessments, and ultimately influence policy.

Creating a model democratic alternative to the surveillance state

The past few decades have shown how that model has failed. In my lifetime, the United States has done little to reduce fossil fuel use and, aside from a brief moment during the Obama administration, has been more of a climate hindrance than a leader on the international stage.

We have known for decades that we should stop burning fossil fuels as quickly as possible. There is plenty of scientific uncertainty in the projections, but not enough to weaken that conclusion. What is holding back action is not science, but politics, money, and power, especially the power of the fossil fuel industry and its allies.

So what, then, is the value of more climate science? Sherwood Rowland, who with Mario Molina first predicted ozone depletion, famously told Paul Brodeur, “What’s the use of having developed a science well enough to make predictions if, in the end, all we’re willing to do is stand around and wait for them to come true?”

I don’t have a simple answer to that question. I just know that I need to struggle with it.

My training didn’t prepare me. The education of a scientist focuses exclusively on how to do science, not why to do it, or how the science actually lives in the world. That only works if we trust the political, social, and economic systems in the larger society to take our work and do something good with it. Once we lose that trust—and I would argue we have lost it—the absence of context in our training becomes a gnawing gap. It’s profoundly disorienting.

Scientists are not alone in this. Some journalists, for example, are rethinking their reporting standards. Giving equal space to both sides of a story is inconsistent with the public good when one side’s view is based on flagrant lies, as with either climate or election denial.

Great and terrible things are happening at the same time. The threat to our democracy remains more acute than ever. The planet continues to heat up. But climate action is happening as never before: the Inflation Reduction Act, passed a couple months ago by Congress and signed by President Biden, is the first substantial climate legislation ever to become law in the United States—and the Democratic party wasn’t punished for it in the midterms. The private sector, too, has discovered climate; my students are suddenly in great demand in the corporate world. Much of what is happening may be greenwashing, but that’s where it has to start, as words on paper can then be used to hold companies accountable.

For myself, I’m doing research oriented towards climate adaptation, because that’s where I can have the greatest impact. I’m using my public platform to speak out, on politics as well as climate. And I’m trying to support my students and colleagues, as many of them struggle with some of the same questions.

Hurricane Sandy started this process for me, by forcing me to think anew about the societal relevance of my work. Subsequent storms, both atmospheric and political, have intensified the process. Neither are going away anytime soon. I am not under any illusions that anything I do will change the world. But I need to feel that I am doing something, beyond generating specialized knowledge for my peers and trusting that it will gain broader value without my further involvement. Getting to this point has been painful, but it has been gratifying to learn that I am far from alone.