Iran competes in the World Cup as a major women’s protest movement is roiling the country; women will soon fight ‘for their right to be in stadiums,’ one Iranian woman says

Iranian soccer fans hold up signs reading Woman Life Freedom and Freedom For Iran, prior to the World Cup group B soccer match between England and Iran at the Khalifa International Stadium in in Doha, Qatar, Nov. 21, 2022. (AP Photo/Alessandra Tarantino)

DOHA, Qatar (AP) — To 27-year-old Mariam, the World Cup match ticket was a precious gift. A sports fanatic, she traveled to the World Cup in Qatar from Tehran to catch Iran’s opening game Monday against England, her first live soccer match.

Women are banned from attending men’s matches in Iran.

“I’ve never attended a football match in my life so I had to take this chance,” said Mariam, a student of international relations who, like other Iranian women at the match, declined to give her last name for fear of government reprisals.

Iran is competing in the World Cup as a major women’s protest movement is roiling the country. Security forces have violently cracked down on demonstrations, killing at least 419 people, according to Human Rights Activists in Iran, a group that has been monitoring the protests.

The unrest was spurred by the Sept. 16 death of 22-year-old Mahsa Amini in the custody of the country’s morality police. It first focused on the state-mandated hijab, or headscarf, for women, but has since morphed into one of the most serious threats to the Islamic Republic since the chaotic years following its founding.

“A big achievement for protesters would be to have the choice to wear the hijab,” said Mariam. Her brown hair draped over her shoulders and ran long down her back. “But after that, women will go for their right to be in stadiums.” 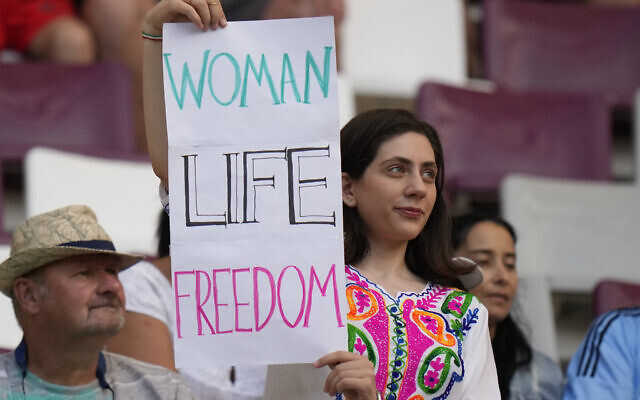 A woman holds up sign reading Woman Life Freedom, prior to the World Cup group B soccer match between England and Iran at the Khalifa International Stadium in in Doha, Qatar, Nov. 21, 2022. (AP Photo/Alessandra Tarantino)

In an effort to restrict large gatherings, Iran has closed all soccer matches to the public since the protests erupted. The reason for authorities’ fear became apparent as fans filtered into the Khalifa International Stadium in Doha on Monday. Many Iran fans wore T-shirts or waving signs printed with the mantra of the uprising — “Woman, Life, Freedom.” Others wore T-shirts bearing the names of female protesters killed by Iranian security forces in recent weeks.

The World Cup in Qatar, just a short flight across the Persian Gulf from Iran, has emerged as a rallying point for Iranian political mobilization. Protesters have even called on FIFA, soccer’s governing body, to prohibit Iran from competing in the tournament over restrictions on women in soccer stadiums and the government’s crackdown.

The question of whether to root for the national team has divided Iranians as the team becomes entangled in the country’s combustible politics. Many now view support for the Iranian team as a betrayal of the young women and men who have risked their lives in the streets.

“The protest movement has overshadowed the football,” said Kamran, a linguistics professor who lives in the verdant northern province of Mazandaran. “I want Iran to lose these three games.”

Anusha, a 17-year-old whose Tehran high school has been rocked by protests, said the past few weeks of unrest had changed everything for her.

“A few months ago I would have said of course I want Iran to win against England and America,” she said. “Now, it’s strange. I really don’t care.” 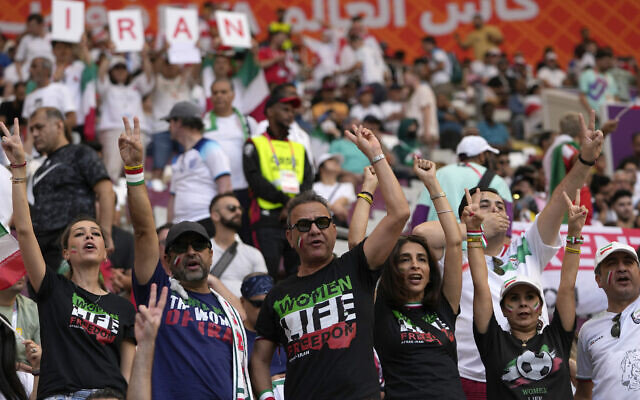 Others insist the national team, which includes players who have spoken out on social media in solidarity with the protests, is representative of the country’s people and not its ruling Shiite clerics. The team’s star forward, Sardar Azmoun, has been vocal about the protests online. Two former soccer stars have even been arrested for backing the movement.

“At the end of the day, I want the players to achieve their dreams,” said Mariam. “It’s not their fault our society is so polarized.” 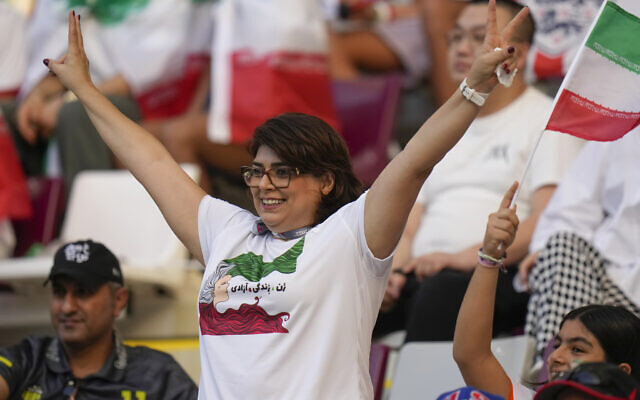 Iranian soccer fans cheer prior to the World Cup group B soccer match between England and Iran at the Khalifa International Stadium in in Doha, Qatar, Nov. 21, 2022. (AP Photo/Alessandra Tarantino)

The Iranian government, for its part, has tried to encourage citizens to support their team against Iran’s traditional enemies. Iran plays the United States on Nov. 29 — a contentious showdown that last occurred at the 1998 World Cup in France.

Observers note that the players are likely facing government pressure not to side with the protests. Iranian President Ebrahim Raisi has urged his government to prepare for potential problems. Iran International, the Saudi-financed Farsi news channel that heavily covers the Iranian opposition, reported that Qatari authorities barred its reporters from attending the World Cup under Iranian pressure.

“We’re waiting for them to show us they’re supporting the people in Iran,” Azi, a 30-year-old Iranian fan living in Ottawa, Canada, said of the national team. “Some kind of sign, by any way they can.”

I joined The Times of Israel after many years covering US and Israeli politics for Hebrew news outlets.

I believe responsible coverage of Israeli politicians means presenting a 360 degree view of their words and deeds – not only conveying what occurs, but also what that means in the broader context of Israeli society and the region.

That’s hard to do because you can rarely take politicians at face value – you must go the extra mile to present full context and try to overcome your own biases.

I’m proud of our work that tells the story of Israeli politics straight and comprehensively. I believe Israel is stronger and more democratic when professional journalists do that tough job well.

Your support for our work by joining The Times of Israel Community helps ensure we can continue to do so.