Holocaust denial has long been illegal in Germany. A new amendment aims to criminalize denial of other war crimes and genocides wherever they happen and would apply to denying atrocities committed in Ukraine.

Alleged war crimes in Bucha, Ukraine. Genocide of the Yazidi. Human rights violations against Uyghurs in China. The list of atrocities in conflicts around the world is long. Yet time and again, some people downplay or deny these crimes ever happened. Lawmakers in Germany no longer want to tolerate this state of affairs and want to make such statements punishable by law if they are used to stir up hatred or disturb the public peace.

The lower chamber of German parliament, the Bundestag, voted for an amendment at the end of October, and on Friday, it is set to pass in the Bundesrat, the upper chamber which represents the state governments. The approval, denial, and “gross trivialization” of war crimes and instances of genocide will now fall under the criminal offense of “incitement of the people” in a newly created Paragraph 5 of Section 130.

“It was about giving law enforcement a stronger guideline about how and what they can investigate,” Michael Kubiciel, a legal scholar at the University of Augsburg, told DW. “But above all, it was about meeting the demands of the European Commission. And that has now been done.”

Indeed, Germany has been in no hurry to pass the measure. An EU directive to combat racism was made in 2008, and the German government was forced to react now because of the threat of EU infringement proceedings.

For Josephine Ballon, chief lawyer for the organization HateAid, which supports victims of online hate, the change comes at the right moment.

“I’m excited to see how the amendment will play out,” Ballon tells DW. “And I definitely see a practical scope for it. Right now, in the context of the Ukraine war, we see some things that could fall under it. I would say the amendment comes at a time when it can be quite relevant.”

If enacted, the amended law would also apply offline. Factual discussion of possible crimes under international law will not be affected by the change in the law, says Aziz Epik, an assistant professor of criminal law at Hamburg University.

“But if you have a meeting, for example, where there’s agitation against Ukrainians, or talk of the ‘fascist regime’ in Kyiv and such things … or there’s a trivialization of what happened in Bucha, then we could well end up in situations where the new paragraph could apply,” Epik adds.

Much criticism after change

There has also been criticism of the amendment, including from legal scholars and historians. Some complained of a lack of transparency because the amendment was passed in the Bundestag without notice, late in the evening, and without prior debate. Others think the paragraph unnecessarily curtails freedom of expression.

Kubiciel disagrees: “I think the whole discussion is a prime example of the old saying: much ado about nothing. There is no scandal either behind the procedure, or with the amendment as such.”

He pointed out that even before this new measure, publicly approving of a genocide was also punishable in Germany under the laws against “Volksverhetzung,” or “hate speech against a people.”

Kubiciel does not see any significant infringement of freedom of speech: “It’s about whether private citizens can speak out. They are still allowed to do that. They are also allowed to deny, as long as they’re not inciting hatred. And then, of course, only if the court … can legally prove that the denial was not true.”

The fog of war

But he can understand one criticism: The reference to ongoing conflicts. The German amendment explicitly allows the denial of war crimes in current conflicts to be punishable — even though the EU left open the option of limiting the offense only to past war crimes that have been investigated and proven in court.

This could have made sense because the truth is rarely clear during a war, and allegations made during a war have often turned out to be untrue.

Kubiciel sees this problem, but, in such cases, he does not expect charges to be brought under the new paragraph. 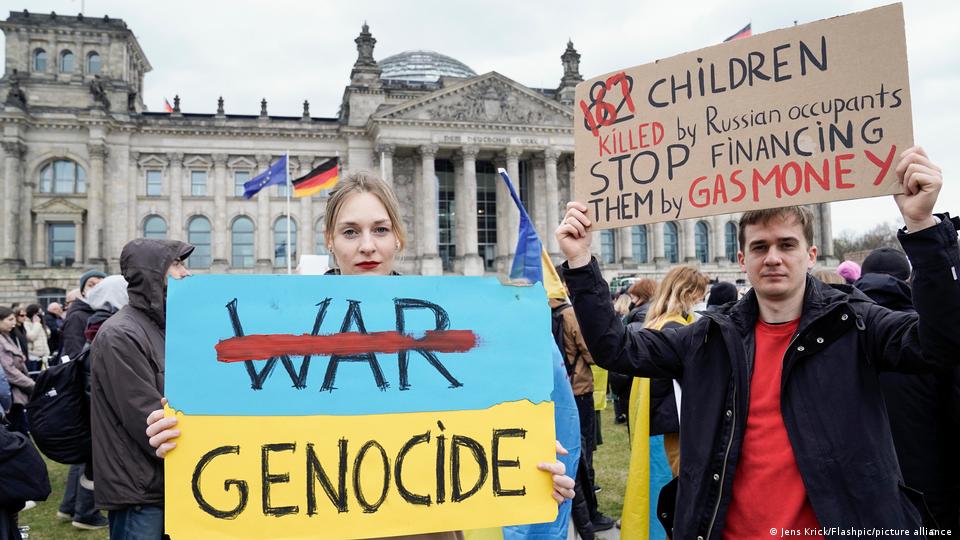 “I think the courts will only become active at a time when the fog of war has lifted somewhat,” he said. “When the facts become so clear that prosecutors actually believe they have enough evidence as well.”

In a statement to DW, the Justice Ministry said that it had “good reasons” not to limit itself to past war crimes. “After all, the EU Framework Decision only allows such a limitation for the acts of denial and gross trivialization, but not condoning,” the ministry said, arguing that this would mean too much inconsistency.

The invasion of Ukraine and reactions both offline and online have shown that the extension to include denial and trivialization of war crimes might not be a toothless tiger.

But there may be political implications. Aziz Epik points out that the amendment, if passed, could create “delicate foreign policy situations” for the German government. This would apply, for example, if German district courts had to indirectly pass judgment on, say, Chinese crimes under international law. The German government could then find itself in having to position itself more clearly than it has done so far.

If the Bundesrat approves the amendment, German courts will be able to rule on current war crimes. For Josephine Ballon from HateAid, it is important that this happens “with a sense of proportion.” But she assumes that it will because “incitement of hate” is a highly complex offense. Many terms in it leave considerable room for interpretation, which is why public prosecutors and courts are already very cautious and only allow charges and trials to be brought in a small number of well-proven cases.

Whether these will now increase, whether civil society organizations and individuals will also make use of the new Paragraph 5 will only become apparent in months and years.

This article was originally written in German.

While you’re here: Every Tuesday, DW editors round up what is happening in German politics and society. You can sign up herefor the weekly email newsletter Berlin Briefing.