Billionaire rails against 30% fee iPhone maker charges for all applications sold via its online outlet, says Apple has threatened to remove Twitter from virtual shelves

A phone screen displays a photo of Elon Musk with the Twitter logo shown in the background, in Washington, DC, October 4, 2022. – (OLIVIER DOULIERY / AFP)

SAN FRANCISCO, United States (AFP) — Twitter owner Elon Musk on Monday opened fire against Apple over its tight control of what is allowed on the App Store, saying the iPhone maker has threatened to oust his recently acquired social media platform.

Musk also joined the chorus crying foul over a 30 percent fee Apple collects on transactions via its App Store — the sole gateway for applications to get onto its billion-plus mobile devices.

A series of tweets fired off by Musk included a meme of a car with his first name on it veering onto a highway off-ramp labeled “Go to War,” instead of continuing onward toward “Pay 30%.”

The billionaire CEO also tweeted that Apple has “threatened to withhold Twitter from its App Store, but won’t tell us why.”

Apple did not immediately reply to an AFP request for comment.

Both Apple and Google require any social networking services on their app stores to have effective systems for moderating harmful or abusive content.

But since taking over Twitter last month, Musk has cut around half of Twitter’s workforce, including many employees tasked with fighting disinformation, while an unknown number of others have voluntarily quit.

He has also reinstated previously banned accounts, including that of former US president Donald Trump. 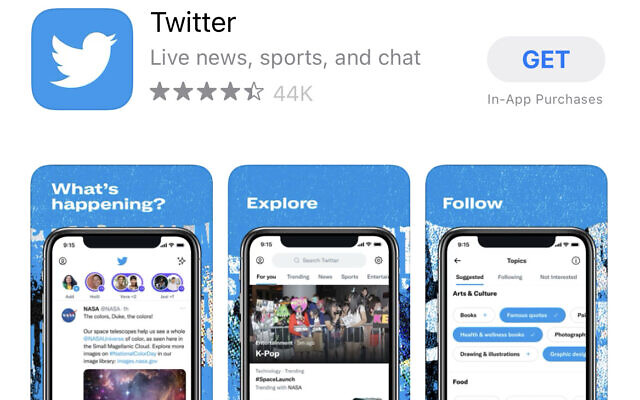 Screen capture of the Twitter application on Apple App Store, November 29, 2022. (App Store. Used in accordance with Clause 27a of the Copyright Law)

Yoel Roth, the former head of trust and safety at Twitter who left after Musk took over, wrote in a New York Times op-ed that “failure to adhere to Apple’s and Google’s guidelines would be catastrophic,” and risk “expulsion from their app stores.”

Describing himself as a “free speech absolutist,” Musk believes that all content permitted by law should be allowed on Twitter, and on Monday described his actions as a “revolution against online censorship in America.”

He also tweeted that he planned to publish “Twitter Files on free speech suppression,” but without clarifying what data he had in mind to share with the public.

Though Musk says Twitter is seeing record-high engagement with him at the helm, his approach has startled the company’s major moneymaker — advertisers.

In recent weeks, half of Twitter’s top 100 advertisers have announced they are suspending or have otherwise “seemingly stopped advertising on Twitter,” an analysis conducted by nonprofit watchdog group Media Matters found.

Musk on Monday accused Apple of also having “mostly stopped advertising on Twitter.”

“Do they hate free speech in America?” he asked, before replying with a tweet tagging Apple CEO Tim Cook.

In the first three months of 2022, Apple was the top advertiser on Twitter, spending some $48 million on ads, which accounted for more than 4% of the social media platform’s revenue, according to a Washington Post report citing an internal Twitter document. 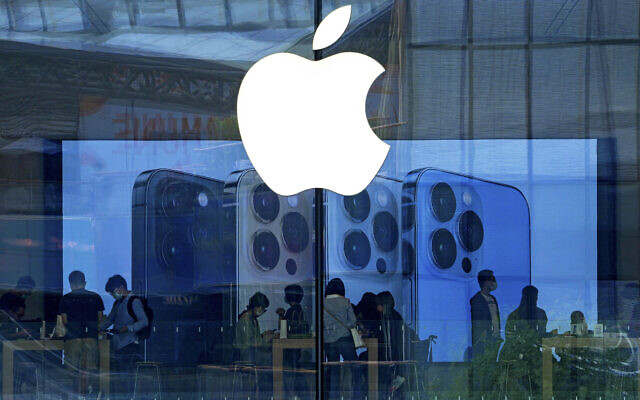 Sarah Roberts, an information studies expert at the University of California, Los Angeles, told AFP that “Musk didn’t understand that Twitter itself was a brand, had cachet.”

Musk on Monday also called Apple’s fee on transactions through its App Store a “secret 30% tax.”

He shared a video released last year by Fortnite maker Epic Games that portrayed Apple as an oppressor in a mocking spin on a famous “1984” ad for Macintosh computers.

Apple has clashed in court with Epic, which has sought to break Apple’s grip on the App Store, accusing the iPhone maker of operating a monopoly in its shop for digital goods or services.

A federal judge last year ordered Apple to loosen control of its App Store payment options but said Epic had failed to prove that antitrust violations had taken place.

Musk’s controversial moves at Twitter, along with the possibility he will need to sell more Tesla shares to keep the social media platform afloat, has taken shine off of the electric car company and its stock, according to Wedbush analyst Dan Ives.

“The Musk vs Apple new battle is not what investors want to see,” Ives said in a tweet.

“(Wall) Street wants less drama, not more as this Twitter situation remains the gift that keeps on giving for the Tesla bears with every day a new chapter.”