Another 3 people given prison time for allegedly being members of network accused of destroying property, kidnapping individuals for interrogation

“This morning, the sentences of four main members of the gang of mobsters related to the Zionist intelligence service were executed,” the judiciary’s Mizan Online website reported.

IRNA said the country’s powerful Revolutionary Guard announced the arrests of a network of people linked to the Israeli agency. It said the members had previous criminal records and tried to disrupt the country’s security.

Israel and Iran are regional arch-enemies and Iran occasionally announces the detention of people it says are spying for foreign countries, including the United States and Israel. Iran does not recognize Israel and supports anti-Israeli terror groups across the region, such as Hezbollah and Hamas.

Network members allegedly stole and destroyed private and public property and kidnapped individuals and interrogated them, according to the report. It said the alleged spies had weapons and received wages from Mossad in the form of cryptocurrency.

IRNA identified the executed prisoners as Hossein Ordoukhanzadeh, Shahin Imani Mahmoudabadi, Milad Ashrafi, and Manouchehr Shahbandi. Three other members of the group received sentences of five to 10 years in prison, according to the news agency, but they were not identified.

Reports did not say how the executions were carried out.

Iran and Israel have long accused each other of spying. Israel views Iran as its greatest threat and has repeatedly threatened to take military action to prevent Iran from acquiring nuclear weapons. Iran denies seeking such weapons and has vowed a harsh response to any Israeli aggression.

In January, Israel said it had broken up an Iranian spy ring that recruited Israeli women via social media to photograph sensitive sites, gather intelligence and encourage their sons to join Israeli military intelligence.

In July, Iran said it arrested members of an armed group linked to Mossad after they sneaked into Iran from across its western border.

In 2020, Iran executed a man convicted of leaking information to the US and Israel about a prominent Revolutionary Guard general who was later killed by a US drone strike in Iraq. 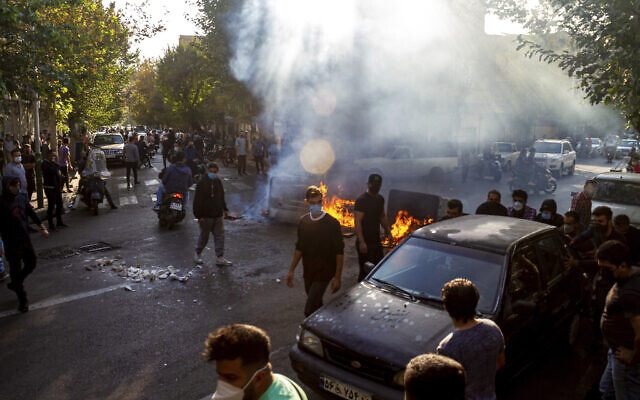 Iranians protest the death of Mahsa Amini in Tehran, October 27, 2022. (This photo was taken by an individual not employed by The Associated Press and obtained by the AP outside Iran)

The executions come at a time of heightened tensions in Iran after more than two months of protests sparked by the death in custody of Mahsa Amini.

The 22-year-old Iranian of Kurdish origin died on September 16 after morality police in Tehran arrested her for an alleged breach of the Islamic Republic’s dress code for women.

More than 300 people have been killed in the unrest, including dozens of security force members, an Iranian general said on Monday.

Thousands have been arrested, among them around 40 foreigners.

Iran’s judiciary has already confirmed six death sentences over the protests, and rights group Amnesty International says that, based on official reports, at least 21 people currently on trial are charged with crimes that could see them hanged.

Iran currently executes more people annually than any nation other than China, according to rights groups.