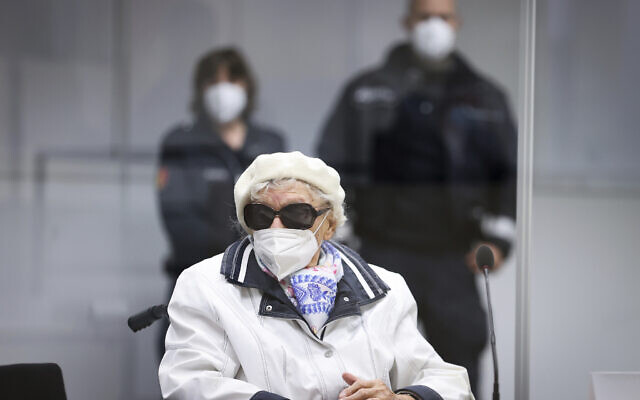 Defendant Irmgard Furchner sits in the courtroom at the beginning of her trial in Itzehoe, Germany, November 9, 2021. (Christian Charisius/Pool via AP)

Lawyers for a 97-year-old former secretary to the SS commander of Nazi Germany’s Stutthof concentration camp ask for their client to be acquitted, arguing that she didn’t know about the atrocities committed at the camp located in what is now northern Poland.

Irmgard Furchner has been on trial for over a year at the Itzehoe state court in northern Germany. In her closing statement, Furchner said she was sorry for what had happened and regretted that she had been there at the time, according to a court spokesman.

Her lawyers request her acquittal, arguing that the evidence hadn’t shown beyond doubt that Furchner knew about the systematic killings at the camp, meaning there was no proof of intent as required for criminal liability.

Prosecutors accuse Furchner of being part of the apparatus that helped the Nazis’ Stutthof camp function during World War II. In their closing arguments last month, they called for her to be convicted as an accessory to murder and given a two-year suspended sentence.

Tens of thousands of people died at Stutthof and its satellite camps, or on death marches at the end of World War II.

Furchner, who made headlines last year when she absconded from trial, is being tried in juvenile court because she was under 21 at the time of the alleged crimes.

The court said a verdict is expected on December 20.