Created as a tool of soft power to serve the Kremlin, the Russian state-funded broadcaster RT weaponises the news so as to present an alternative and popular narrative to that of “elite Western media”. It remains influential in the West despite being blocked there following the current invasion of Ukraine, says the political scientist Anton Shekhovtsov. 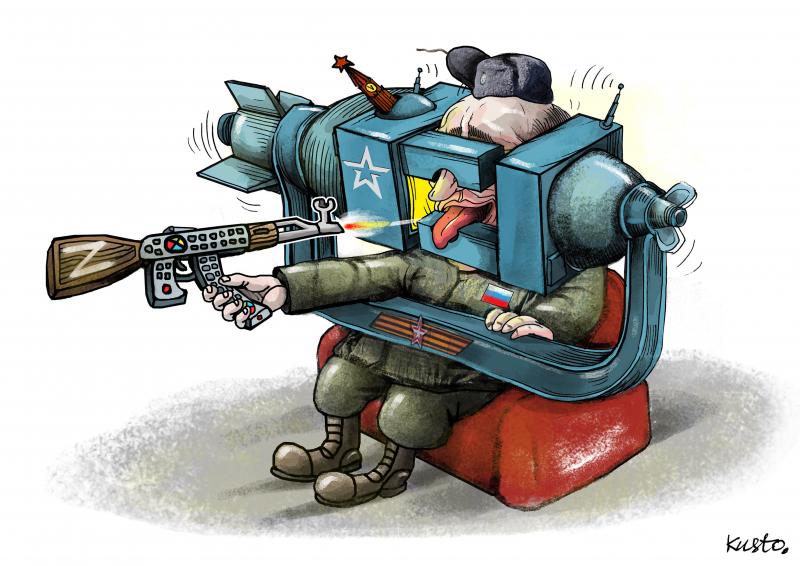 During Vladimir Putin’s first presidential term, the Kremlin elites became concerned about Russia’s image abroad, especially in the West. Stereotypes depicting Russia as a cold country full of drunken bears with balalaikas were one thing. Quite another was the damage to Russia’s international reputation caused by the massive human rights violations committed by government forces during the most active phase of the Second Chechen War.

International television was (and often still is) considered to be one of the most important tools to influence a nation’s image abroad. Mikhail Lesin, Russia’s Minister of Press, Broadcasting and Mass Communications from 1999 to 2004, reportedly promoted the idea of creating a Russian international TV channel as early as 2001.

More : How I became a target for the Kremlin

Presumably disgruntled by criticism of freedom of speech in Russia during a recent trip to America, Lesin said: “I’ve long ago stopped being ashamed of the word ‘propaganda’ … We need to propagandise Russia in the international market, its positive side, or we’ll look like bears in their eyes, wandering the streets growling”. Lesin’s plan involved “a large-scale campaign in the US featuring a series of social ads about Russia.” Promising to spare no expense, he said that financial backing of the project would come both from the state budget and private businesses, which were not indifferent to Russia’s image in the West.

In 2004, however, Moscow took a more active stance in promoting Russian foreign policy positions abroad. That year, the Kremlin established the Valdai International Discussion Club, meetings that were aimed at establishing direct communication between Kremlin officials, including Putin himself, and foreign influencers – journalists, academics, experts, think-tankers, etc. Russian operatives often used Valdai as a recruitment venue aiming to bring as many foreign (especially western) influencers over to the Kremlin side as possible.

Especially after the Ukrainian “Orange revolution”, which Moscow perceived as a western-instigated threat to Russia’s influence in the post-Soviet space, Moscow felt that it needed to step up its outreach to international audiences. That seemed to be a perfect time to return to Lesin’s idea of an international TV channel. Lesin, who was then an advisor to Putin, teamed up with the Kremlin Press Secretary Alexey Gromov, and developed the idea of the Russia Today TV channel.

The launch of Russia Today was announced at the beginning of June 2005. A 25-year-old uber-loyal Russian journalist, Margarita Simonyan, was appointed the editor-in-chief, possibly on Gromov’s personal recommendation – they closely worked together when she was a reporter in the Kremlin pool.

According to a press release, the aim of the channel was to “reflect a Russian position on the major issues of international politics” and “inform the audience of events and phenomena of Russian life”. In 2013, Putin would retrospectively admit: “When we designed this project back in 2005, we proceeded from the premise that one more strong player had to emerge on the world information scene, a player that would not just provide an unbiased coverage of what was happening in Russia but would also try – I want to stress this: try – to break the Anglo-Saxon monopoly on the global information streams.”

Russia Today was founded by the Autonomous Non-Profit Organisation TV Novosti, a subsidiary of the Russian state-owned domestic news agency RIA Novosti. It was reported that $30 million would be invested in the new TV channel by the end of 2005. But reports on the sources of funding were contradictory: some said Russia Today would be directly funded by the state, others mentioned borrowing from commercial banks. Eventually, it was confirmed that Russia Today was primarily funded by the state. As Putin stated in 2013, “certainly the channel is funded by the government, so it cannot help but reflect the Russian authorities’ official position on the events in our country and in the rest of the world one way or another”.

The English-language Russia Today TV channel was initially scheduled to go on the air in autumn 2005, but for technical reasons the launch of broadcasting was postponed to December of that year. The original production team of Russia Today consisted of 344 people, of whom 72 were foreigners. Many hosts were foreigners, since they knew western realities better and spoke better English.

According to the Kommersant newspaper, which in 2005 was still owned by the London-based Russian businessman Boris Berezovsky, salaries of Russia Today employees were double those of Russian journalists working for Russian federal TV channels. Novice correspondents of Russia Today reportedly received a monthly salary of between $2,500 and $3,000.

Speaking to the Russian government newspaper Rossiyskaya Gazeta in December 2005, Simonyan said that Russia Today already had news bureaus in Washington DC, Paris, London and Jerusalem, and was going to open desks in Cairo and New York. As the number of its own bureaus was clearly not enough for an operation of the envisaged scale, Russia Today would at that time also cooperate with international news agencies.

Russia Today was meant to be an instrument of Russian soft power, much like CNN for America and CCTV-9 for China. The channel’s earnings would be measured in influence rather than rubles

But the launch of Russia Today in 2005 should not be seen purely in terms of Moscow’s relations with the West. Writing in December 2005, Julian Evans noted that the Russian initiative to launch an international TV channel mirrored “what many rich countries do to improve cultural and diplomatic relations with the rest of the world. The aberration is not that Russia is trying its hand at public diplomacy, but that it had avoided it for so long.”

By the time Russia started broadcasting Russia Today, several major countries alongside the US and UK had already established their strong state-funded presence in the international TV environment. Germany’s Deutsche Welle launched its TV channel in 1992, making German, English and Spanish became its three broadcasting languages in the course of the decade. China Central Television began broadcasting its English language TV channel CCTV-9 (renamed later into CGTN) in 2000. France’s 24 international TV channel in French and English languages was launched a year after Russia Today, in 2006.

Russia Today was meant to be an instrument of Russian soft power, much like CNN for the United States and CCTV-9 for China. Earlier domestic criticism that there was no “demand” for Russia Today was therefore misplaced: the channel’s earnings would be measured in influence rather than rubles. But the launch of Russia Today was also part of the rise of what James Painter calls “counter-hegemonic news” – TV channels “set up with the explicit intention of challenging the ‘BBC/CNN approach’ to world events”.

This counter-hegemonic trend was started by Venezuela, which launched Telesur, a Latin American TV channel, in July 2005. Telesur’s broadcasts were initially only in Spanish, but the channel added English in 2015. Russia Today was followed by Qatar’s Al Jazeera English in November 2006 and Iran’s Press TV in July 2007. It was no coincidence that these channels emerged during an unprecedented hike in oil prices that brought windfall revenues to the four oil-rich countries.

Between 2005 and 2008, the major criticism of Russia Today was that it was “a breathless cheerleader for the Kremlin”. The implication was that it would offer no objective assessment of the politics and policies of the Russian leadership and focus only on positive (real or imagined) developments in Russia and the country’s achievements in arts, sports, space travel, etc.

But everything started to change in 2008. Moscow called its war on Georgia in August that year “a peace enforcement operation”. Russia won the war in five days, occupying South Ossetia and another Georgian region, Abkhazia. While the overwhelming majority of Russians supported Moscow’s blitzkrieg, Russian politicians, experts and officials discussed a paradox: Russia had easily won the Russian-Georgian war, but lost the information war.

The implication was that Russia had failed to convince the international community of the righteousness of Moscow’s invasion of Georgia. One pro-Kremlin Russian journalist provided an insight into the establishment’s thinking: “In the eyes of almost all the countries of the world, Russia is seen as an aggressor that has attacked a weak Georgian state.”

Gleb Pavlovsky, one of the Kremlin’s major political strategists at the time, argued that “Russia’s loss of the information war with the western media” had been caused by the absence of Russian global media. Another reason – and Vladimir Putin himself was of this opinion – was the sheer “power of the West’s propaganda machine”.

But the failure of international Russian media to convince western audiences of the legitimacy of Russia’s actions in Georgia was not the only conclusion drawn. Rather, the entire “soft power” approach was faulted. Following Tsyganok’s logic, Russia was, indeed, in need of “information forces” for future wars. This realisation led to the rebranding and re-conceptualisation of Russia Today. In 2009, the channel was renamed RT – not to conceal its Russian origins, but to appeal to international audiences, who might be less attracted by a channel presumably talking just about “Russia today”. The messaging also changed dramatically. The channel ceased to be an instrument of Russian soft power and became an instrument of Russian political warfare against the West.

While insisting on RT being a legitimate media resource, RT’s editor-in-chief Margarita Simonyan would not hesitate to speak of it in weaponised terms. In 2012, she compared RT to a Defence Ministry, saying that the TV channel should be prepared for an information war well in advance because it was impossible “to only start making a weapon when the war has already started”. The following year, she elaborated her idea about RT as a weapon of political warfare: “If we do not have an audience today, tomorrow and the day after, it will be the same as in 2008”.

To build up its audience and hone its skills in information warfare, RT started positioning itself as “a channel deliberately presenting an alternative point of view to the mainstream on all matters”. This contrarian turn involved engaging with themes and commentators that represented the fringes of social, political and cultural life in western societies.

Far-right and far-left politicians, conspiracy theorists, isolationists and anti-establishment bloggers were given an international platform out of all proportion to their significance at home. RT became engaged in what the political scientist Andrew Wilson called “nudge propaganda”. This works by “finding parties, politicians, and points-of-view that are already sure of their world-view rather than confused, and giving them a nudge – so long as these views are usefully anti-systemic”.

More : How Russian propaganda on LGBT rights seeped into Lithuania

With time, RT grew to present itself, in a radically populist way, as a global underdog fighting against ascendant western power, an elite of the anti-elites. To match its aspirations, it started to expand. RT launched its Arabic version Rusiya Al-Yaum in 2007, the Spanish-language channel RT en Español in 2009, RT America in 2010, RT UK and RT Deutsch in 2014, and RT France in 2017.

After the renewed Russian invasion of Ukraine in late February 2022, the EU and its allies banned RT and its various editions. Facebook and Twitter suspended RT’s accounts and blocked external links to RT’s websites. YouTube blocked all Russian state-funded media worldwide, including RT and Sputnik, while Google removed RT and Sputnik from search results in the EU. Apple and Microsoft pulled RT from their global app stores. These measures caused RT to lose much of the audience it had been building up since 2005. Nevertheless, as an exercise of malign influence, it will likely stay the course under one name or other in the years to come.

This is an adapted and abridged introduction to Anton Shekhovtsov (ed.),RT in Europe and Beyond: The Wannabe Elite of the Anti-Elites, published by the Centre for Democratic Integrity.