Erdogan has been threatening to launch a new incursion into northern Syria to push out Kurdish forces he blames for a November bomb blast that killed six people in Istanbul.

A 2019 agreement between Moscow and Ankara ended another offensive by setting up a 30-kilometer (19-mile) “safe zone” to protect Turkey against cross-border attacks from Syrian territory.

Erdogan accuses Russia — a key player in the Syria conflict which backs President Bashar Assad — of failing to follow through on the deal.

Erdogan told Putin in a phone call it was “important to clear the (Kurdish fighters) from the border to a depth of at least 30 kilometers,” his office said.

Erdogan stated it was a “priority,” the Turkish presidency said.

Some of the Kurdish forces are stationed in areas under Russian military control.

Others have been fighting with the United States against jihadists from the Islamic State group. 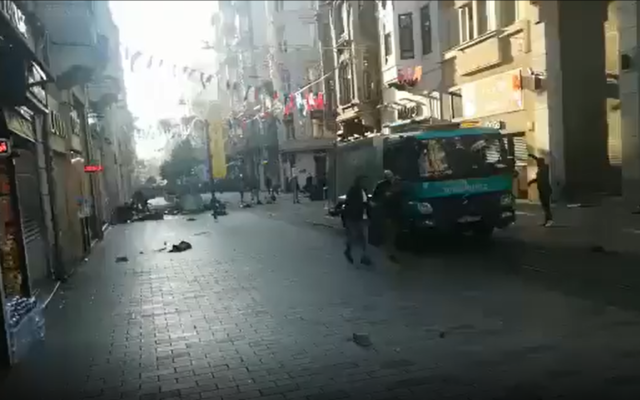 The scene of a suspected bombing in downtown Istanbul on November 13, 2022. (Screenshot used in accordance with Clause 27a of the Copyright Law)

The Kremlin confirmed the 2019 agreement was discussed in the call.

“The two countries’ defense and foreign services will maintain close contacts in this regard,” a Kremlin statement said.

Both Moscow and Washington have been putting diplomatic pressure on Ankara not to launch a new ground campaign.

Turkey has been pummeling Kurdish positions near the border with artillery fire and drone strikes since November 20 in response to the bomb blast.

The Turkish government has blamed the bombing on the Kurdistan Workers’ Party, or PKK, and its Syrian affiliate the People’s Protection Units, or YPG. But it has not yet poured in any major forces to support the ones it already has stationed in the area.

The PKK has waged a 38-year insurgency against Turkey that has led to the loss of tens of thousands of lives. It is listed as a terrorist organization by Turkey, the United States and the European Union. The YPG, however, is not designated as a terror group by Washington or Brussels and has spearheaded the US-led fight against IS in Syria.

Erdogan has threatened to follow up strikes on northern Syria with a ground offensive. A planned Turkish invasion earlier this year was halted amid opposition by the US and Russia, both of which have military posts in the region.

Moscow has closely cooperated with Turkey in northern Syria in the past and in recent months has pushed for reconciliation between Ankara and Damascus. 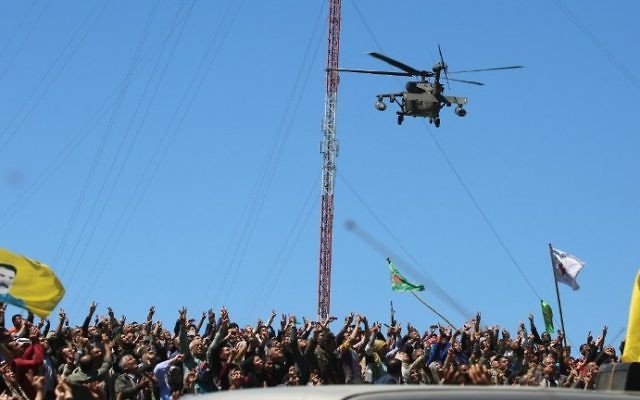 Kurds wave flags of PKK leader Abdullah Ocalan as a medical helicopter, from the US-led coalition, flies over the site of Turkish airstrikes near the Syrian Kurdish town of Derik, known as al-Malikiyah in Arabic, on April 25, 2017. (AFP Photo/Delil Souleiman)

The call between Erdogan and Putin follows a visit to Turkey this week by Russian Deputy Foreign Minister Sergei Vershinin for talks on the situation in Syria.

Erdogan’s office said the presidents also discussed energy — Russia has offered to make Turkey a hub for the sale of its natural gas — as well as the deal brokered by the United Nations and Turkey that safeguards the export of Ukrainian grain from its Black Sea ports.

Erdogan told Putin that the agreement could be expanded to “different food products and other commodities gradually,” his office added without providing further detail.