VIENNA — The Austrian city of Linz said Thursday it planned to rename a street honoring the founder of the luxury carmaker Porsche after a commission probing controversial names found his Nazi past “problematic.”

The renaming of streets and other public places is still a hotly debated issue in Austria — Adolf Hitler’s birthplace — which Nazi Germany annexed in 1938 and which long cast itself as a victim.

Only in the past three decades has the country begun to seriously examine its role in the Holocaust, which saw the murder of about a third of Austria’s Jewish population of 200,000.

The Porscheweg and three other streets are to be renamed in Linz, just under 200 kilometers (120 miles) west of Vienna, a city spokeswoman told AFP on Thursday.

The city senate is expected to approve the renaming this month, she added. No new names have been fixed as yet for the streets.

Linz tasked a commission of six experts in 2019 to probe the city’s street names.

In its report published in November, the commission found 64 names “problematic” out of a total of 1,158 names.

They belong to 61 men and three women, who were at the very least members of the Nazi party, if not active supporters propagating Nazi ideology, the report noted. 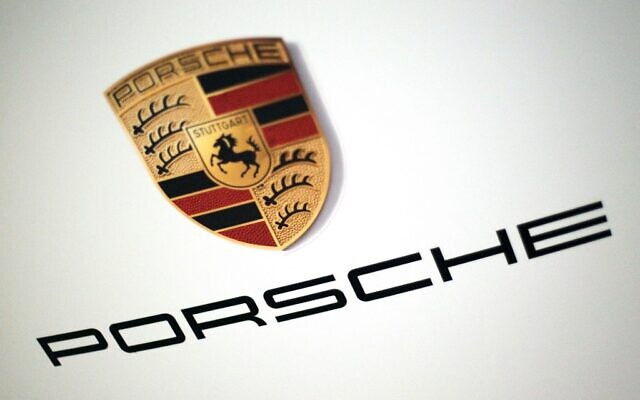 This file photo taken September 29, 2022, shows the logo of German car producer Porsche AG pictured on the sidelines of the launch of the company’s initial public offering at the Frankfurt Stock Exchange in Frankfurt am Main, western Germany. (Daniel Roland/AFP)

Four men in particular were seen as antisemitic, including Austrian-born engineer Ferdinand Porsche, founder of the luxury car brand that bears his name.

“Porsche played a central role in the NS (National Socialism) war economy and actively promoted the forced labor of prisoners of war and concentration camp inmates,” the city said in a statement, announcing the commission’s findings.

In doing so, Porsche “accepted their deaths and the deaths of their children due to the inhumane conditions in the camps,” it added.

Porsche did not immediately reply to an AFP request for comment, but the company indicated in Kurier newspaper that it did not support the renaming move.

“In our view, erasing history in public space does not lead to any social progress,” it said.

The other three names the commission found particularly “tainted” — and where the street names will be changed — are composer Hans Pfitzner, entertainer Franz Resl and bishop Johannes Maria Gfoellner.

Numerous streets throughout Austria have been renamed or contextualized through plaques after being found to be racist, often honoring antisemitic or otherwise tainted historical figures.

Streets that refer to Porsche still exist in other parts of Austria.