Tycoon, who got Israeli citizenship in 2018, was seen leaving the country in March; is said to have lost over half his fortune due to Western sanctions over Ukraine war

Russian oligarch Roman Abramovich, right, and his son Aaron Alexander Abramovich at the Western Wall to mark the latter’s bar mitzvah, in the Old City of Jerusalem on December 20, 2022. (Arie Leib Abrams/Flash90)

Russian-Israeli oligarch Roman Abramovich was photographed Tuesday visiting the Western Wall in the Old City of Jerusalem, reportedly for the bar mitzvah of his son, Aaron.

Abramovich, 56, the former owner of England’s Chelsea soccer club, has been sanctioned by Britain and the EU for his purported support of Russian President Vladimir Putin and Moscow’s ongoing invasion of Ukraine. On Monday, Canada said it too would be sanctioning Abramovich and seizing assets linked to him.

Abramovich was photographed at the Western Wall, the holiest place where Jews can pray and a popular destination for Jews across the world celebrating a bar mitzvah.

Abramovich holds Israeli citizenship and has been spotted in Israel several times since Russia’s invasion of Ukraine earlier this year.

Analysts have said Russia’s invasion has been a personal disaster for Abramovich, wiping billions off the value of his assets.

According to an updated list of richest people issued by The Times newspaper in May, the sanctions toppled Abramovich from his position as Israel’s richest man with an estimated net worth of $6.9 billion, down from $14.5 billion last year.

The top spot was claimed by Eyal Ofer, the head of Ofer Global Holdings, with a fortune of $15.4 billion derived from assets in the real estate and shipping industries, followed by his brother Idan Ofer, with $10.5 billion from shipping and energy interests. 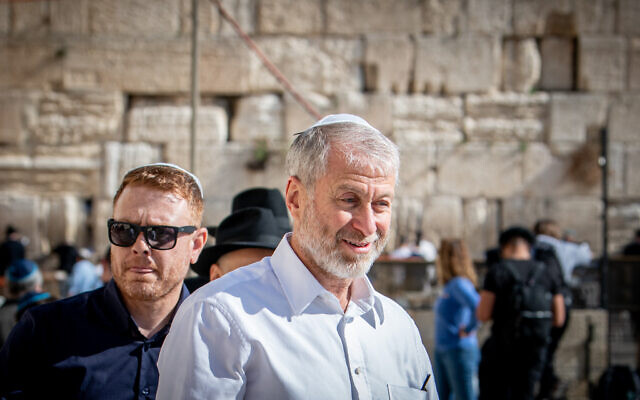 In late March, Abramovich took part in Turkish-hosted peace talks between Russia and Ukraine, which failed to resolve the conflict.

He took Israeli citizenship in 2018, although it is not clear how much time he spends in the country. He was last seen in Israel when leaving Ben Gurion airport in March.

Controversially, he also holds a Portuguese passport by claiming to be a descendant of Sephardic Jews.

Agencies contributed to this report