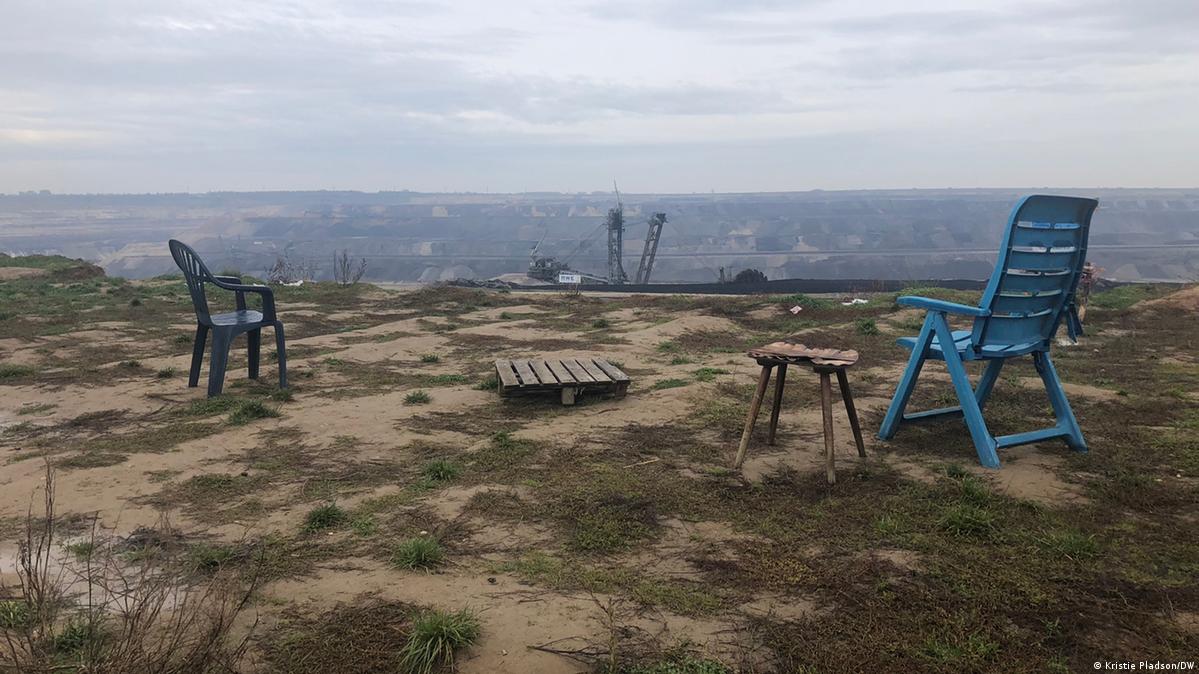 Germany had been winding down its brown coal production. Then an energy crisis hit. Now, thousands of people have promised to resist January plans to demolish a village and dig up the coal beneath it.

“If this village goes, then Germany’s 1.5-degrees commitment to the Paris Agreement goes, as well.”

It’s an October afternoon in a rural corner of western Germany, the village of Lützerath in the state of North Rhine-Westphalia (NRW). The morning rain clouds have moved out, and the sun is glistening off the damp grass and leaves in the small meadow where we’re walking.

Scattered among the tall trees, small makeshift houses on raised wooden platforms loom over us in all directions. A couple of people move around on the ground below. Just out of sight, 200 meters (220 yards) away, is Garzweiler II, one of Europe’s largest coal pits.

“It’s a very, very important space, not only as a symbol, as many politicians tend to say,” Alma (family name withheld), the press officer for the initiative Alle Dörfer Bleiben (All Villages Stay), tells DW on a tour of the village. “It’s a very practical place of climate justice because there is so much coal below.”

Hundreds of towns lost to coal

Lützerath has been occupied by protesters since 2020, when plans emerged to demolish the village and dig up the brown coal — or lignite — beneath it. Since the end of World War II, around 300 towns in Germany have been demolished for lignite mining, causing more than 120,000 people to be resettled.

In recent years, aside from activists, only one farmer and a few tenants were still living in Lützerath. A visit to the town reveals little more than one main road and a dozen old, brick farm houses covered in protest graffiti.

Coal production to increase in the short term

Germany says it wants to be carbon neutral by 2045. In 2020, it announced it would stop burning the climate killer, gradually phasing out its coal-fired plants by 2038.

But attempts to save Lützerath got more complicated after Russia’s invasion of Ukraine triggered an energy crisis in Europe. Cut off from Russian natural gas, Germany has scrambled to secure an alternative energy supply. That included crawling back to its homegrown coal industry. This year, the government has moved to bring around a dozen plants back on the grid, and extended the lifespan of several that were meant to be shuttered.

To compensate for the unexpected increase in coal production, the government cut a deal with energy company RWE to move the coal phaseout deadline in NRW, a major coal-producing region, to 2030. https://static.dw.com/image/63877640_605.jpg

Lausitz: Rebirth of an industrial wasteland

“We have to bring power plant units back onto the grid in the short term and need more coal,” said Markus Krebber, the CEO of RWE, when German magazine Der Spiegel asked him in November about his company’s plans to clear Lützerath. “That said, we will then phase it out twice as quickly as planned.”

Protesters argue that the early phaseout doesn’t matter: burning the coal below Lützerath will cause Germany to overshoot its CO2 emissions targets. It’s a claim backed up by the German Institute for Economic Research (DIW).

Their arguments and protests have not convinced the courts or politicians. In December, it was announced that the activists will be cleared from Lützerath in January and that the demolition of the village will begin.

Looking at the pit itself is like looking at a boring version of hell: no fire and brimstone, just a massive, gray, obviously man-made hole, dotted here and there with giant excavators scraping away mechanically at its walls. They run 24 hours a day. A local from a nearby town tells me that when the wind blows a certain way, you can hear them at night. The pit’s edges stretch out and wrap around, leaving you with no sense of where it ends. A wind turbine on the other side provides some sense of scale.

A handmade sign warns people to stay at least 10 meters back from the edge. But aside from a strip of yellow police tape lying crumpled on the ground, there’s nothing keeping anyone from walking right up to the edge. Someone has set out a few folding chairs, anticipating the urge to stop and take in the view.

There are major ambitions to expand the production of climate-neutral hydrogen in NRW, partly to replace the economic hole that will be left when the coal industry dies. The new phaseout timeline complicates things.

“We’re talking about seven years to finish the plants and have the hydrogen basically ready to use,” says Andre Wantke, a RWE employee and local politician in Bergheim, a town about 30 kilometers (18.6 miles) from Garzweiler II and home to the Niederaussem coal plant. Niederaussem is the seventh most polluting coal plant in the world, according to a study by the University of Colorado Boulder.

It’s evening and we’re standing outside on a street not far from the plant. As the sun sets, the cloud of vapor billowing from the massive cooling tower fades into the night sky. A Bergheim local tells me that as a child, when his family would drive home from vacation, he’d see that cloud from the highway and know he was almost home.

A phaseout in 2038 was already very ambitious, Wantke says. “What will happen next for the younger employees? There are many question marks. Let’s take a look at where the jobs will be in the end, where they will be created. Yes, renewables create new jobs, but on this scale, as things are now, it will be very difficult.”

It also raises questions about the landscape.

“If you cut this industry eight years from now, it’s like an emergency stop to a running system,” says Solbach, Bedburg’s mayor. “It’s not just that we won’t burn coal anymore. The whole landscape transformation process comes to an unexpected end.”

In the long term, eight local coal pits, including Garzweiler II, will be filled with water, turning the area into a lake district. But that transformation will take several decades to complete and is little comfort to those affected by changes to the coal phaseout strategy. https://static.dw.com/image/63348929_605.jpg

Nor is it a fate accepted by the protesters. More than 11,000 people have signed a pledge promising to show up and resist the destruction of Lützerath,the initiative “Alle Dörfer Bleiben” said in a recent press release. Resistance to other coal projects in the region has historically involved physical resistance and the destruction of property.

We finish our walk of the meadow, and Alma and I come out on the road separating the trees from the edge of the coal pit. I ask if she really thinks they have a chance at saving the village.

“If we start thinking it’s impossible, then it’s never going to happen. And I don’t think it is possible to give up on 1.5 [degrees of global warming],” she says gesturing at the protest camp. “And the fact that this is possible makes me feel like good things must be possible as well.”

For more on the coal industry and the energy crisis in Germany, check out this episode of DW’s environment podcast On The Green Fence

While you’re here: DW editors round up what is happening in German politics and society every Tuesday. You can sign up here for the weekly email newsletter Berlin Briefing.