Iran president vows vengeance, 3 years after its general Soleimani was slain by US

Raisi says retaliation is ‘obvious’ and those responsible for death of Quds Force commander will have no relief; accuses US of driving anti-regime protests

Mourners attend a ceremony marking anniversary of the death of the late Revolutionary Guard Gen. Qassem Soleimani, shown in the posters, who was killed in Iraq in a US drone attack in 2020, at Imam Khomeini Grand Mosque in Tehran, Iran, January 3, 2023. (Vahid Salemi/AP)

DUBAI, United Arab Emirates — Iran’s president on Tuesday vowed to avenge the killing of the country’s top general on the third anniversary of his death, as the government rallied its supporters in mourning amid months of anti-government protests.

General Qassem Soleimani, the architect of Iran’s regional military activities, was killed in a US drone strike in neighboring Iraq. He is hailed as a national icon among supporters of Iran’s theocracy, while the protesters have torn down billboards and defaced other images of him.

Addressing a ceremony marking the general’s death, Iranian President Ebrahim Raisi said those behind it “should know that retaliation is obvious,” adding that “there will be no relief for murderers and accomplices.”

He said Soleimani had defeated “US hegemony” and praised him for his role in leading Iran-backed forces against the Islamic State extremist group. Soleimani was also mourned in neighboring Iraq alongside Abu Mahdi al-Muhandis, an Iraqi militia leader killed in the same strike. Iranian-backed militias make up the bulk of Iraq’s state-supported Popular Mobilization Forces.

Iran responded to the killing of Soleimani by launching a barrage of missiles at US bases in Iraq, causing dozens of brain concussion injuries but no deaths among US soldiers stationed there. Iranian officials have repeatedly vowed to take further steps and imposed sanctions on individuals accused of taking part in the operation.

On Monday, Iran’s state-linked Jam Jam newspaper published the names and photos of 51 Americans it said were involved in the strike and were “under the shadow of retaliation.” The list included several current and former senior US civilian and military officials as well as individuals who appeared to be soldiers involved in aircraft maintenance at regional bases. 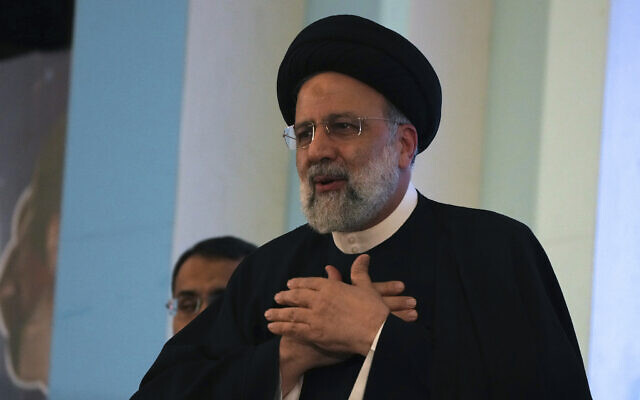 Iranian President Ebrahim Raisi places his hands on his heart as a gesture of respect to the crowd after the conclusion of his speech in a ceremony marking the anniversary of the death of the late Revolutionary Guard Gen. Qassem Soleimani, who was killed in Iraq in a US drone attack in 2020, at Imam Khomeini Grand Mosque in Tehran, Iran, January 3, 2023. (Vahid Salemi/AP)

Raisi accused the US of waging a “hybrid war” against Iran, referring to the protests. Iranian officials have accused the US and other foreign powers of fomenting the latest unrest in the country, without providing evidence.

Iran’s judiciary said Tuesday that it had indicted two French nationals and a Belgian, without providing further details. Iran is holding a number of foreigners and dual nationals on charges of endangering national security or taking part in protests. Rights groups accuse Iran of denying them due process and using them as bargaining chips with the West, something Iranian officials deny.

The protests, which were ignited by the death of a young woman in mid-September who was being held by Iran’s morality police for allegedly violating the country’s strict Islamic dress code, quickly spread across the country and show no sign of letting up.

The demonstrators say they are fed up with decades of social and political repression and are calling for the overthrow of the ruling clerics. The protests mark one of the biggest challenges to Iran’s theocracy since the 1979 revolution that brought it to power.

At least 516 protesters have been killed and over 19,000 people have been arrested, according to Human Rights Activists in Iran, a group that has closely monitored the unrest. Iranian authorities have not provided an official count of those killed or detained. 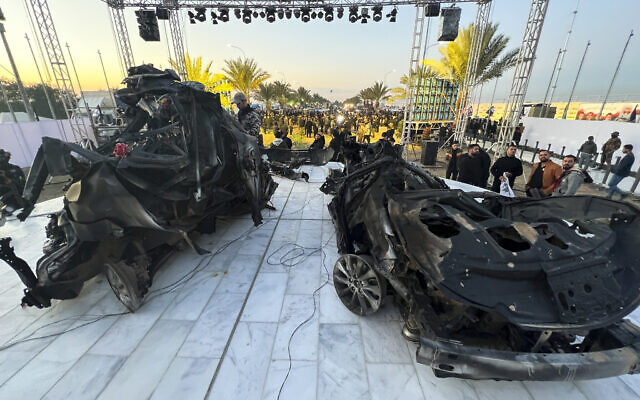 Wrecks of the cars in which Abu Mahdi al-Muhandis, deputy commander of Iran-backed militias in Iraq known as the Popular Mobilization Forces and Iran’s top general Qassam Soleimani were assassinated during events for the third anniversary of their deaths, in Baghdad, Iraq, January 2, 2023. (Ali Abdul Hassan)

Soleimani, who led the elite Quds Force of Iran’s Revolutionary Guard, was credited with helping to arm, train, and lead armed groups across the region, including the Shiite militias in Iraq, fighters in Syria and Yemen, the Lebanese Hezbollah terror group, and terror groups in the West Bank and Gaza. The US held him responsible for the deaths of many of its soldiers in Iraq. Within Iran, Soleimani is closely associated with an Islamic theocracy that the protesters view as violent and corrupt.

Times of Israel staff contributed to this report