The bloody chess of the English prince in Afghanistan

Message of solidarity from Free Syria to Free Ukraine! 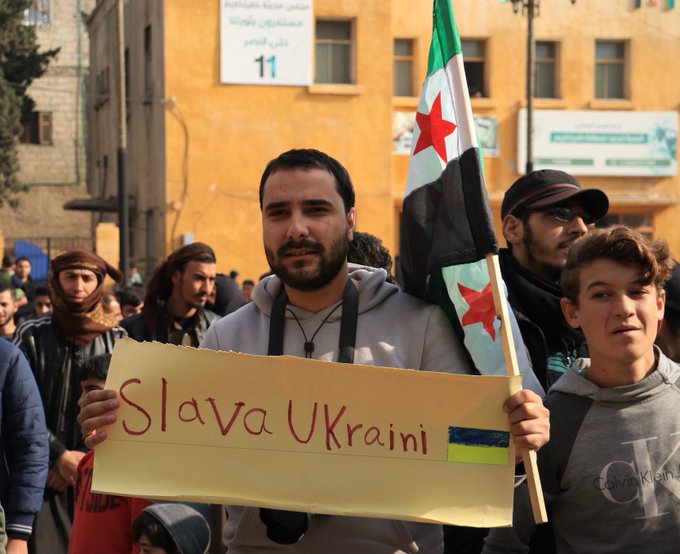 put on their platform movies made by ISIS or Taliban that are spreading terrorist ideologies? If not — why are they sharing the movie glorifying the russian war crimes made by those recognised as terrorist organisation in the EU.

Russia is facing: Reduced demand, while the prices drop, for gas and oil; Devaluation of its currency; Lack of basic technological goods; Rising unemployment; Lack of access to hard currency And now Kremlin is announcing more taxes to fund the war… This is how countries die.

Everyone knows, Medvedev is insane and alcoholic and possibly drug addict. If anything comes close to U.S. in 100 mile range, it would take 3 minutes to sink it, and no single ship would be able to do anything, it takes fleet working together to wage war.

Yevhen and Liza, service members of the 121st Territorial Defense Brigade. Even in the greatest war of the 21st century, there is a place and a time for love. Ukraine is

Wow-wow! Look who is going to read the Fight of Our Lives!

. If you’re heading to Ukraine – get your guidance

This is how Putin’s “truce” looks like. On January 6, Russian forces shelled Bakhmut with artillery, resulting in thirteen wounded and two dead Ukrainian citizens, the Office of the Prosecutor General reported.

“Filled with sadness and hopes of a victorious 2023, hundreds of Ukrainian refugees celebrated their first Christmas since fleeing the Russian invasion at a contemporary theatre in Warsaw”

The Bakhmut defenders published a public request for drones. Today we have raised almost $8,000 in response. That is several more drones in the sky above Bakhmut, holding back the orcs and saving lives. Want to help get more in the air? Donate today!

Historic event is happening today. First time in centuries, Christmas service in Kyiv Pechersk Lavra, an ancient monastery complex in the heart of Kyiv, is held by the Ukrainian Orthodox church. Ukrainian Christmas carols are sung. 10/11

Russians take 300 children from Donbas to Moscow: allegedly because of “serious injuries”

pravda.com.ua Russians take 300 children from Donbas to Moscow: allegedly because of “serious injuries” Serhii Haidai, Head of Luhansk Oblast Military Administration, has reported that the occupiers have taken 300 children from Luhansk and Donetsk Oblasts to
===============

#Finland will transfer “Leopard 2” battle tanks to Ukraine if Europe is the first to do so.

The SBU has identified three Russian soldiers who abducted and tortured civilians in the temporarily occupied regions of the #Zaporizhzhia region.

babel.ua The SBU identified Russian troops who “hunted” Ukrainian patriots in Zaporizhzhia region The Security Service of Ukraine (SBU) has identified three Russian soldiers who abducted and tortured civilians in the temporarily
==============

Russia executed one missile strike and 20 artillery attacks against Ukraine in the last 24 hours despite Vladimir Putin’s declaration of a “Christmas ceasefire”.

The court declared that the man convinced his grandmother to sell her apartment for 820,000 rubles [€10,600], took her to a garage, and hit her on the head with a hammer. He told his relatives that the grandmother moved to Ukraine instead.

Putin has no reverse gear. He has no capacity to compromise or negotiate. He will only escalate and throw more young Russian men into the meat grinder to save his own skin.

Intelligence: Russia plans to mobilize half a million conscripts in January. Vadym Skibitsky, Ukraine’s deputy military intelligence chief, said the conscripts will be sent to the east and south and will be part of Russian offensives in spring and summer, the Guardian reports

Leak reveals Roman Abramovich’s billion-dollar trusts transferred to his children just before Russian sanctions were imposed. I guess it would be logical for the authorities to consider sanctioning his children

Exclusive: Files raise questions about whether oligarch’s children were made beneficiaries to protect fortune from possible asset freezes