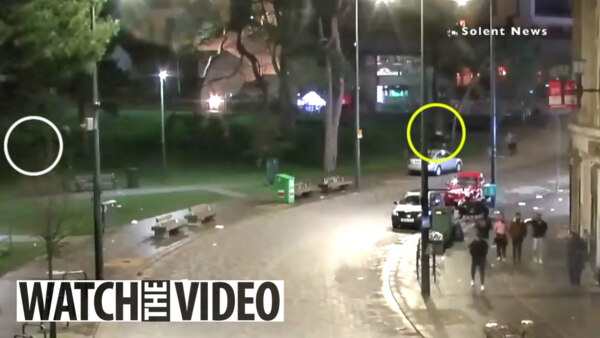 Fury over asylum seeker murderer, 21, who pretended to be 14 with bogus ID as MP asks: how the hell was he ever let in?

AN asylum seeker who murdered a DJ was on the run for double murder when he conned his way into the UK.

Lawangeen Abdulrahimzai claimed to be 14 when he arrived here ferry in 2019 — but was four years older.

He had already gunned down two other Afghans with an assault rifle in Serbia in a clash over people trafficking.

His violent past emerged yesterday after he was convicted of fatally stabbing Thomas Roberts.

DJ and aspiring marine Thomas, 21, tried to intervene in a 4.30am row over an e-scooter in Bournemouth last March.

Abdulrahimzai was wanted by Serbia when he arrived by ferry in Poole without documents.

He had also been convicted of drug-dealing in Italy, and turned down by Norway for asylum.

But he was welcomed into Britain, having used five identities after leaving Afghanistan in 2015.

Abdulrahimzai was given a foster carer and went to a Bournemouth school where he terrorised younger classmates.

While there, he was convicted of the Serbia murders and jailed in his absence to 20 years.

A boy he beat up was kept at home by his parents, and one mum told The Sun: “The kids were petrified of him and knew he was much older than he was pretending to be.”

It was claimed he frightened girls into sending him indecent selfies.

And a Snapchat video shown in court showed him in a street fight with another man.

Police and social services were aware of Abdulrahimzai after he posed with a machete on a TikTok video.

He was reported to police for having a knife two days before killing Thomas.

Police said inquiries were carried out but he was not arrested and no weapon was found.

They had no idea Abdulrahimzai was wanted for murder until making international inquiries following his arrest.

The keen boxer admitted stabbing to death Thomas but claimed it was manslaughter through loss of self-control.

He had earlier headbutted a man outside a club, and claimed he was in fear of his life when he rowed with Thomas’s pal James Medway over the scooter.

The court heard how Abdulrahimzai became aggressive and Thomas slapped him twice in the face to calm him.

The Afghan said: “I just reacted, I stabbed him twice… I acted instinctively. I lost control.”

One of the wounds pierced Thomas’s heart. Prosecutor Mr Lobbenberg said: “Twenty four seconds is all it took for Abdulrahimzai to confront, argue with and kill Thomas Roberts.”

Abdulrahimzai told jurors that his parents were killed by the Taliban after they discovered his father was working with Nato.

He claimed he lashed out at Thomas because he still feared Taliban.

His foster carer Nicola Marchant-Jones said he was shy, kind and sweet when he arrived but he had “night terrors” about his past.

His default setting was “fight” and he could go “from zero to 100 almost instantly.”

Thomas’ family said in a statement: “Thomas was loved by many people and continues to be loved in his absence.

“We would like this to be a warning to everyone not to carry knives so other families do not suffer in the way we are now.”

Following the conviction prosecutor Nic Lobbenberg told how Abdulrahimzai shot dead the two Afghans in a Serbia shed where they lived in July 2018.

Sources said there was a row over a bid to get into Germany.

Mr Lobbenberg said: “He was armed with an automatic assault rifle, two others had pistols… one of the group said ‘Who is the smuggler?, He shot 18 rounds of a 7.62 calibre Kalashnikov.”

Bournemouth West MP Conor Burns said of Thomas: “This tragic case shines a light on the need for more rigorous checks and speeding up the asylum processing system.

BCP Council said they had to treat him as a child based on what he told authorities.