AnalysisWar in Ukraine and climate

What impact will the war in Ukraine have on the environment?

The war in Ukraine is not only a tragedy for its inhabitants, but also for the environment. In this heavily industrialized – and already polluted – region, clashes and bombings could have dramatic consequences on the preservation of soils, water, and public health. 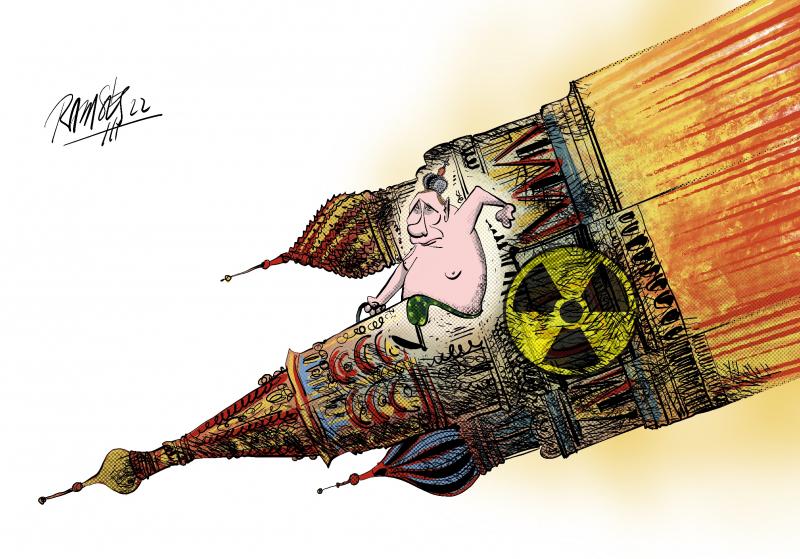 The war in Ukraine rages over one of the most heavily industrialised and polluted territories in the world. The legacy of Soviet heavy industry was already a public health disaster but the Russian invasion risks further damage to the natural systems on which people living in these regions depend. The ecological impacts of the conflict is a reminder that even when the fighting stops, the violence will be felt for generations to come.

War always pollutes the environment, especially when it damages hazardous industries. Between 2014 and 2022, the conflict in Donbas in eastern Ukraine, a heavily industrialised region, has presented significant risks to the environment and public health of people living in the area. Russia’s full-scale invasion of Ukraine with its takeover of nuclear power plants, and attacks on cities, thermal power plants, and industrial enterprises with hazardous facilities dramatically increases the threat of an environmental and public health catastrophe. Truth suffers as war unfolds, and the impeding loss of access to environmental monitoring on the ground coupled with direct disinformation also weaken our capacity to understand and limit environmental harm.

Besides the numerous civilian casualties and the unprecedented displacement of people, Russia’s war on Ukraine will have dire consequences for the environment and public health, not just in Ukraine, but also in Russia, Belarus, Moldova and larger parts of Eastern Europe. The long-ranging effects of environmental harm from war can range from persistent pollution, the loss of ecosystems, fertile soil, and livelihoods to large-scale and regional consequences of industrial disasters highly likely in a country as industrialised as Ukraine.

In 2013 and 2014, following a wave of protests across Ukraine in response to the government’s decision to forego signing an Association Agreement with the European Union, pro-Russian protests erupted in Donbas, a region with a Russian-speaking majority. Over the course of 2014, with Russia’s undercover support and inspiration, protests and occupations of government buildings in Donbas escalated into a war between Ukrainian armed forces and separatist militia backed by Russian troops and paramilitaries. [sendify-optin-form list=”8″ placeholder=”Email” button_text=”Je m’abonne”]

Even though Russia consistently denied its involvement, it established de-facto control over parts of the Donbas region by installing its proxies, providing weaponry, and having a military presence. Since then the self-proclaimed Donetsk People’s Republic (DPR) and Luhansk People’s Republic (LPR) in Donbas carried out numerous grave human rights violations, such as torture and forced displacement. On top of shelling, which never completely ceased over the last eight years, people living in the area also had to cope with cuts in power supplies, heating, and drinking water.

Numerous Ukrainian and international organisations – including Zoï Environmental Network, Ecoplatform, CEOBS, PAX, Environment-People-Law, Truth Hounds, and the OSCE to name a few – have warned for years about the regional environmental and public health consequences of the war in Donbas — the region covering the Donetsk and Luhansk provinces in Eastern Ukraine. Home to around 4500 mining, metallurgical, and chemical enterprises, the Donbas region was polluted before and is home to “Europe’s most significant man-made environmental burden”.

Eighty per cent of those industries have hazardous installations that pose a threat to the environment. The region hosts 200 of Ukraine’s 465 Tailing Storage Facilities (TSFs) – large ponds storing the industrial waste and toxic substances of the region’s heavy mining, chemical, and energy industry. Some of these enterprises and facilities are abandoned by their owners or in disrepair. Many were in the immediate vicinity of the line of contact.

Ever since the conflict began, abandoned coal mines are flooding Donbas with toxic and sometimes radioactive substances. Many environmental risks come from sudden disruptions in the production of mines: mine water needs to be pumped continuously; if the pumping stops, toxic water fills the mineshafts and moves up, eventually reaching and polluting the ground and drinking water. Polluted water from one shaft spills over to others because many of the mineshafts are connected. The Yunyi Komunar (Yunkom) mine, for instance, was the site of a nuclear explosion in 1979 to release trapped gas, and the Luhanska, Proletarska, and H.H. Kapustin mines may contain radioactive waste as well.

Reporting on flooding in the Yunyi Komunar mine raised fears that contaminated water would mix with the ground water and pollute drinking water. Future environmental emergencies such as breaks in the dams of Tailings Storage Facilities may pollute the Siverskyi Donets River – a primary source of drinking water for a large part of the Donbas region too – with transboundary pollution theoretically capable of reaching the Sea of Azov and eventually the Black Sea.

These environmental and public health risks, which international and national reports have already found, will significantly increase with Russia’s invasion of Ukraine on 24 February 2022. A few days before Russia’s invasion, a MLRS Grad rocket hit Luhansk Thermal Power Plant in Schastia, causing power outages and plumes of black smoke. On 13 March, shelling damaged production shops and pipelines of the Avdiivka Coke Plant – Ukraine’s largest producer of coke, a fuel mainly used in the industrial sector.

Damage to critical facilities of the plant could result in the release of harmful substances. Its thermal power plant, which supplies heat to the town of Avdiivka, was also damaged during the attack. Many other industries were damaged throughout Donbas and the rest of Ukraine too. In Sumy, Russian shelling led to leakage of toxic ammonia. The water supply of numerous Ukrainian cities including Donetsk and Mariupol was disrupted by shelling just before the war started, and then in particular during the first month of hostilities.

Today, many NGOs and observers such as PAX, the Conflict and Environment Observatory, and Zoï Environment Network report that Russia has attacked nuclear and hydropower plants, fuel pipelines and depots, and other industrial infrastructure throughout the Ukraine. Indiscriminate bombing of cities not only leads to acute human suffering, but also destroys and dramatically pollutes the urban environment which will prolong and deepen the human suffering of this war.

The severe environmental risks of this war were clear from the outset. Russian troops moving through the exclusion zone of the Chernobyl Nuclear Power Plant – the site of the 1986 nuclear disaster – caused gamma radiation to spike. On 9 March, reports about a power outage, exhausted staff, and a loss of communication with Chernobyl nuclar power plant, raised further concerns of eventual radiation-loaded accidents. On March 10, an airstrike cut the power supply for the research nuclear facility “Source of Neutrons” in Kharkhiv.

Fire by Russian tanks damaged reactors at the Zaporiz’ka Nuclear Power plant, taking them out of operation and switching them off the power grid. Although in its later update the International Atomic Energy Agency (IAEA) reported that the radiation levels in all operational reactors in Ukraine were normal, there is no direct way to confirm this, and the safety of nuclear facilities in close proximity to the front line remains highly compromised.

While people have deep-rooted fears for nuclear catastrophe, disasters following damaged and leaking Tailing Storage Facilities of chemical and mining industries are equally worrisome. From afar, storage facilities resemble still lakes, but these large, dammed structures store the toxic sludge, water, and residue ore from the mining process. Left unattended, these facilities are prone to damage and can leak contaminated wastewater into the environment, eventually reaching ground- and surface waters.

Tailing Storage Facilities can break because of internal erosion, lack of maintenance, or external hazards such as military threats. Catastrophes connected to dam failures are increasingly common around the world. Just ten years ago the spill at the Terrafame mine in Talvivaara, Finland — a company primarily mining for nickel and zinc, with uranium as a by-product — contaminated at least 100 hectares of lake and marshlands with heavy metals and uranium. A cyanide spill near Baia Mare, Romania in 2000 by the gold-mining company Aurul polluted the Tisza River and long stretches of the Danube, and was at the time referred to as the worst environmental disaster in Europe since Chernobyl.

Today the war in Ukraine puts its 465 storage facilities with over six billion tons of toxic waste at great risk of being damaged by accidental or intentional fire. Around 60 percent of Ukraine’s Tailing Storage Facilities are old and some have been abandoned by their owners, and almost three quarters are considered potentially dangerous. Many storage facilities are located meters away from water bodies and are close to towns. Potential failures could lead to the pollution of Ukraine’s major rivers such as the Dniester, Dnipro, and Siverskyi Donets which flow through Russia, Moldova, and Belarus.

The war in Ukraine is taking place amid a cautiously growing optimism about our ability to protect the environment during war as well as hold states and individuals accountable for wartime environmental harm. Until recently, the environmental consequences of war and conflict have largely been ignored in international politics. As recently as in 2014, former UN Secretary General Ban Ki-moon, still alleged that the environment remains a silent casualty of war.

The latest developments such as the codification of the principles for the protection of the environment in relation to armed conflict by the UN International Law Commission (PERAC), expected to be finalised in 2022, and the proposed new legal definition of ecocide have renewed optimism for legal accountability and remedy for environmental harm during armed conflict. Widening the mandate of the International Criminal Court to include crimes against the environment further strengthens the cause, even if the threshold for convincing evidence may be unattainably high and collecting reliable data collection extraordinarily challenging during an active war.

More : Europe and Ukrainian refugees: “It’s great to see that, when you want to, you can”

The disruption or regular environmental monitoring, lack of access to sites in the war zone, unreliable information in mainstream and social media as well as direct disinformation all contribute to this challenge. The latter not least indicates possibly planned “false flag” operations with chemical, biological and even radioactive substances, as environmental information is increasingly weaponised. In 2018, false documents distributed by a hacking group claimed that the US and the Ukrainian authorities had poisoned water supplies with radioactive material from nuclear waste from the Vakelenchuk storage facility. A Ukrainian environmental organisation alleged that its report on shelling and environmental damage in Savur-Mohyla had been appropriated by Russian experts who used their findings to shift the blame for the shelling on Ukraine.

Countering such disinformation in the war becomes increasingly difficult as expertise vanishes because environmental experts are displaced or forced to flee the country along with 4.2 million Ukrainian refugees today. Yet many of them continue their work, and efforts are growing both within Ukraine and among the international community to ensure that environmental damage from this war is not left unaccounted.

In this regard, international organisations such as the Red Cross could play a significant role in preventing disasters by negotiating on the basis of international humanitarian law to stop the attacks on the hazardous facilities in Ukraine. There are rules on prohibitions regarding dams, dykes, and nuclear electrical generating stations, which are established under the Geneva Convention and the Guidelines on the protection of the natural environment in armed conflict.

Besides supporting the collection and assessment of essential data and lending a helping hand to weakened environmental authorities at all levels, the international community should also get prepared to make significant efforts to support the post-war recovery of Ukraine, including restoration of the environment. It will also be essential to help Ukraine ensure that the enormous task of rebuilding the country and its economy is not carried out at new environmental costs.