Henry Ford’s ‘ghost’ opens up about his infamous antisemitism in new art documentary.

A century after the publication of ‘The International Jew,’ filmmaker Andy Kirshner revives the automaker in ’10 Questions for Henry Ford,’ screening at the SF Jewish Film Festival

In 1920, however, Franklin sent back the latest gift with a letter of explaining why. Ford had begun publishing a series of antisemitic articles in his newspaper, The Dearborn Independent. It ran for nearly two years – 91 consecutive weeks. The series was derived from “The Protocols of the Elders of Zion,” although some of its headlines blamed Jews for domestic American issues, such as the “Moron Music” of jazz. Ford later published them as an internationally bestselling four-book series titled “The International Jew.”

“I wanted to complete the picture of Henry Ford,” Kirshner told The Times of Israel. “I didn’t know the extent to which he was an influence on the early Nazi movement and in the last couple of years [before World War II], the influence he had on fascism around the world. It’s an important story to tell, kind of the underbelly of the American entrepreneurial myth.”

In the film, Kirshner creatively brings back Ford as a ghost. The phantasm Ford is played by John Lepard, who is not only an actor in theater, film and TV, with credits including “Scream 4” and “Chicago Fire,” but also the executive director of the Williamston Theatre.

Clad in the automaker’s characteristic boater hat and gray suit, Lepard’s Ford speaks in a folksy Michigan accent; it helps that the actor himself is from the Wolverine State. Wandering the gritty streets of present-day Detroit, the ghost’s focus is on the historical landmarks that reflect the automotive empire Ford built and maintained, including the factories that churned out remarkable numbers of cars in peacetime and military aircraft during WWII. 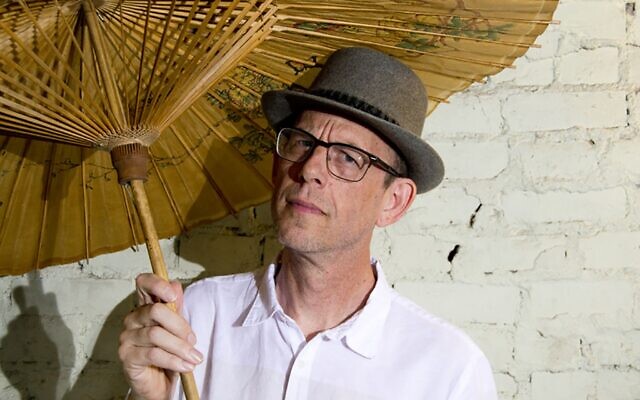 “Most of the stuff in the film that Henry is doing are things he said or [wrote] in his notebooks,” Kirshner said. “A couple of things I invented, but they reflect sentiments that are well-documented, if not his exact words.”

As the title character answers 10 questions about his life and legacy, it’s unclear whether he’s learned from history. The film details some of his controversies, from “The International Jew” to his 1938 acceptance of Nazi Germany’s highest honor for foreigners — the Grand Cross of the German Eagle. He also addresses his troubled relationship with his son, Edsel Ford, whom the film argues is much more than just a namesake of a poorly selling, posthumously released automobile.

A professor at the Stamps School of Art and Design at the University of Michigan, Kirshner brings expertise in theater, dance, music and video. Not only did he direct and write the film, he composed the score and played the saxophone in it.

While the sax was Kirshner’s original entree into the arts, after graduating from Brandeis University and the New England Conservatory he realized that he wouldn’t become the next Charlie Parker — so he went into theater instead. More recently, he branched out into film with the 2016 Amazon Prime drama “Liberty’s Secret,” about a conservative Christian politician who must choose between campaign success and her secret lesbian romance. 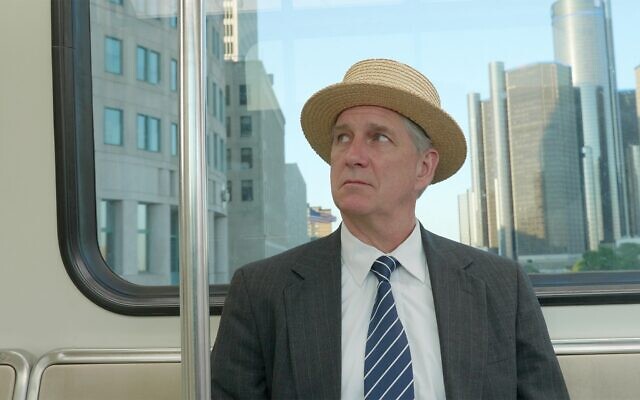 Kirshner’s personal background is also multifaceted: He is the son of a Jewish father and a Christian mother, and he was raised Unitarian. His wife is Jewish, and they are raising their son Jewish as well.

“My wife’s parents and her family are all from Detroit,” Kirshner said. “They grew up in the 1930s and ’40s. They were very aware of Henry Ford’s antisemitism. I heard about it from other relatives of mine, but I didn’t know the impact of his publication — the Dearborn Independent, the books he compiled into ‘The International Jew.’ One of the things I learned is the continuity of antisemitism. Ford, essentially, what he did was that he Americanized traditional European antisemitism, rebranded antisemitism for an American audience with old familiar tropes like international bankers.” 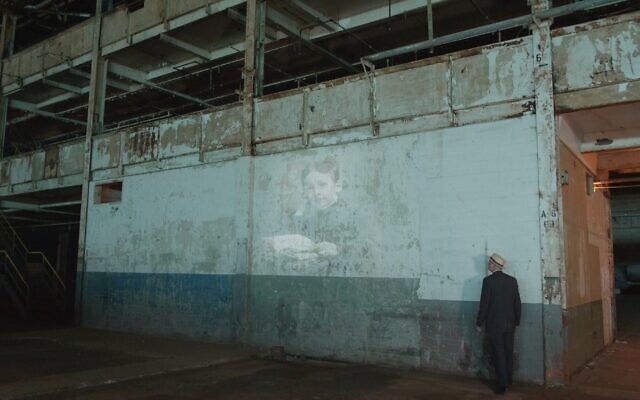 Ford’s ghost tackles some seat-squirming questions, including “But why did you hate Jews?” and “Why did you keep Hitler’s medal?” He protests that he employed thousands of Jews, and that some of his lifelong friends were Jewish. A Jewish architect, Albert Kahn, designed multiple buildings for Ford’s company. Yet the phantasm Ford criticizes immigrant Jews as unable to do what he wanted all of his employees to do — assimilate into America. Ford’s antisemitism won praise in Nazi Germany. Although they never met, Hitler called the automaker “Heinrich Ford” and envisioned him as “the leader of the growing fascist movement in America.”

“He had an impact on a lot of Nazis in the 1920s and ’30s,” Kirshner said. “I didn’t know he supported a lot of right-wing white supremacists up until the 1930s and ’40s, when the war began. It was another aspect of the story that felt very timely with the kind of fascism that’s resurgent here and around the world.

“Ford was kind of a continuation of antisemitism. He really profoundly influenced it and spread it. I would probably argue he was the most influential American antisemite. I really can’t think of anyone else who impacted it as he did.”

The father-son relationship between Henry and Edsel also comes in for some scrutiny, with Edsel getting a reappraisal. Kirshner credits Edsel with unappreciated accomplishments in the company his father founded, including an aesthetic approach to automobile design. Edsel became a patron of the arts, even inviting Mexican muralist Diego Rivera to the Motor City. Rivera’s Detroit Industry Murals are still on display at the Detroit Institute of Arts; they get a frosty reception from the phantasm Ford. Edsel overruled his father when it came to allowing employees to unionize, and backed the company’s extensive involvement in the war effort during WWII, which was also against the patriarch’s wishes.

“The story of the struggle between Henry and Edsel was also the story of other tensions in the film,” Kirshner said. “Authoritarianism versus individual democracy — Henry was basically an autocrat, Edsel was more of a diplomat who made decisions more democratically. Henry had very bigoted views about Jews, Edsel tried to clean up Henry’s mess. He offered to provide a $1 million loan toward the establishment of a Jewish homeland in Palestine — it’s not in the movie — the offer was rejected. It’s probably one of the reasons the Ford Motor Company, since [Edsel’s son] Henry Ford II, has given a lot of funds to Jewish causes.”

One particularly gripping scene involves an ax and reflects Ford’s anger and pain at the premature death of Edsel at age 49.

“Apparently something Henry Ford did was carry an ax in the back of his car,” Kirshner said. “He would show his feelings by chopping at a tree and occasionally a door. [The scene] was based on facts about his character. Having him chop violently shows, at the same time, his love for his son and also his capacity for violence.” 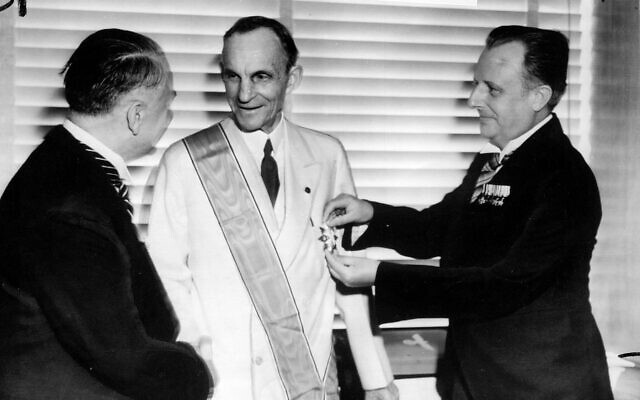 Kirshner’s film has gotten praise from a neighbor who formerly worked for the Ford design wing. Yet it has also received criticism, including in Michigan. A Detroit Free Press article about the film drew numerous negative comments.

“It’s been interesting,” Kirshner said. “A lot of people, especially right here in Michigan… a lot of people are still very attracted by Henry Ford’s popularity. They’re somewhat offended by a film that I think is fair… [it] does not shy from some of his less savory qualities. I’ve gotten a bit of pushback. To call someone a cultural Marxist for making a film about Henry Ford that criticizes his antisemitism, I think it’s pretty funny.”

“He was someone with a lot of gifts and ingenuity,” Kirshner said, “but someone who was corrupted by power, by everyone who told him how wonderful he was, by his own lust for power and also by his bigotry. At the end of his life, he was pretty isolated and pretty miserable despite having this enormous fortune. It’s kind of a tragic story and quite in contrast to the myth of Henry Ford as the totally admirable American entrepreneur.”