No official signal from Israel of plans to send weaponry

Russian ex-president: If Israel sends weapons to Ukraine it will destroy Moscow ties

Former Russian President Dmitry Medvedev on Monday warned Israel against sending weaponry to Ukraine, saying it would destroy all diplomatic relations between Jerusalem and Moscow.

“It seems Israel will supply weapons to the Kyiv regime. A very reckless move. It will destroy all diplomatic relations between our countries,” Medvedev wrote on Telegram.

Medvedev currently serves as the deputy chairman of the Security Council of Russia, and is considered to be a key ally of Russian President Vladimir Putin.

At least one person was killed.

A drone flies over Kyiv during an attack on October 17, 2022, amid the Russian invasion of Ukraine (Sergei SUPINSKY / AFP)

Medvedev’s warning was an apparent response to an Israeli minister’s call on Sunday for Jerusalem to send military aid to Ukraine after reports that Iran was set to provide Moscow with ballistic missiles.

A report by the Russian state-owned Sputnik News tied Medvedev’s comments directly to the statement by Diaspora Minister Nachman Shai.

“This morning it was reported that Iran is transferring ballistic missiles to Russia,” Shai wrote on Twitter.

“There is no longer any doubt where Israel should stand in this bloody conflict. The time has come for Ukraine to receive military aid as well, just as the USA and NATO countries provide,” Shai wrote.

The longtime Labor MK is unlikely to make it back into the Knesset after the November 1 elections, having fallen to an unrealistic slot on his party’s slate after primaries earlier this year.

There has been no official statement from Israel that it is planning to send military aid to Ukraine.

Zelensky and other Ukrainian officials have consistently pressed Israel on the issue since the Russian invasion on February 24.

Though it has sent repeated shipments of humanitarian aid to Ukraine, Israel has repeatedly rebuffed Kyiv’s requests for defense weapons, specifically missile defense systems that could be used to fend off Russian airstrikes, despite expressing sympathy for the country’s plight.

Last month, Zelensky said that Israel had given his country “nothing” to help it defend itself, indicating that its leaders had been disingenuous in rejecting his requests for air defense systems.

“Israel gave us nothing. Nothing, zero,” Zelensky told France’s TV5Monde. “I understand they are in a difficult situation with Syria, with Russia.”

“I understand they need to defend their land, but then I got information from my intelligence services that Israel provides [the air defenses] in other countries. They can sell, they can export, which is why I am shocked,” he said. 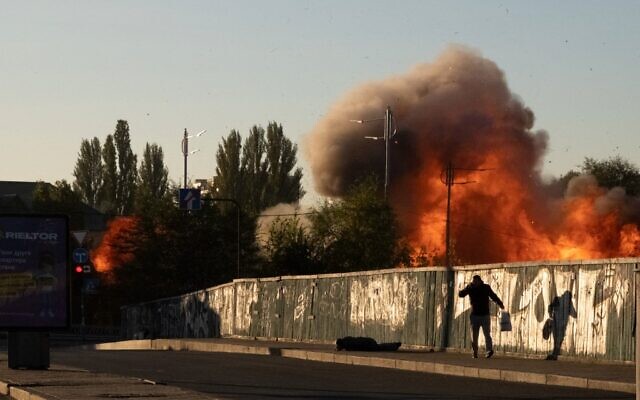 A man is seen on the ground after a blast following a drone attack in Kyiv on October 17, 2022, amid the Russian invasion of Ukraine. (Yasuyoshi CHIBA / AFP)

Israel’s refusal is seen as an attempt by Jerusalem to maintain working ties with Moscow, due to Russia’s control of Syrian air space, where Israel’s air force has carried out hundreds of sorties against alleged Iranian arms shipments and in order to keep groups backed by Tehran from establishing a foothold.

Russia has largely turned a blind eye to the Israeli air strikes, though ties between Jerusalem and Moscow have suffered as Israeli has condemned its invasion of its neighbor.

A senior Ukrainian official has said Israel is providing Ukraine with “basic intelligence” on Iranian suicide drones being deployed by the Russian army.

The wreckage of what Kyiv has described as an Iranian Shahed drone downed near Kupiansk, Ukraine, September 13, 2022. (Ukrainian military’s Strategic Communications Directorate via AP)

Additionally, Israel has sent over 100 tons of humanitarian aid and set up a field hospital in western Ukraine for six weeks at the start of the war.

It also shipped 2,000 helmets and 500 flak jackets that the Defense Ministry said would be given to Ukrainian rescue forces and civilian organizations.