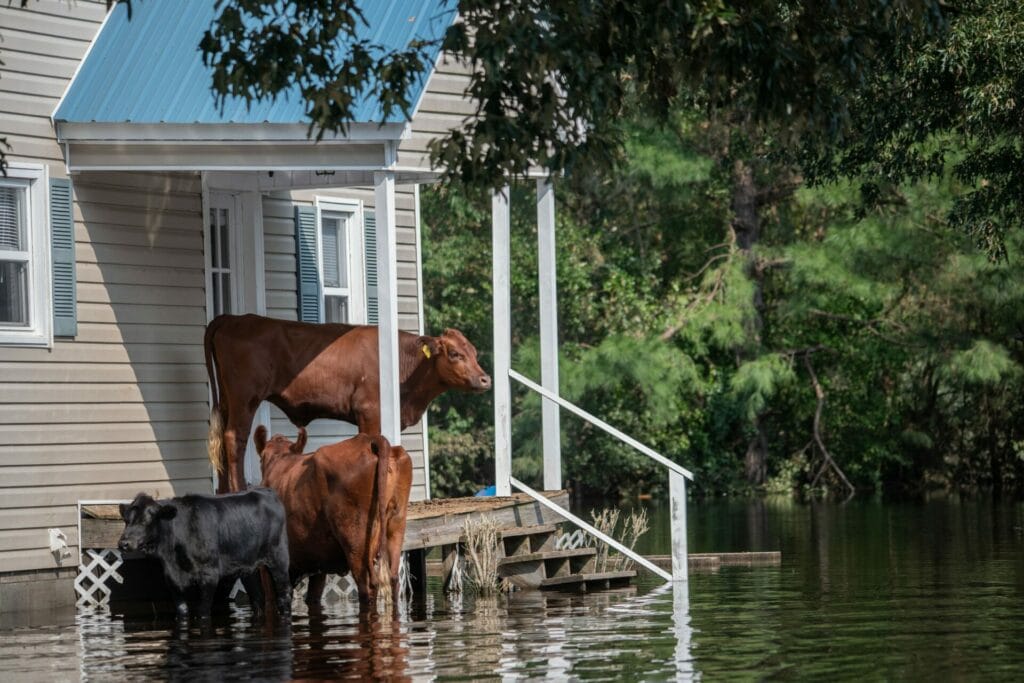 No country can claim to be prepared for the most likely warming scenarios outlined in the latest blockbuster international scientific assessment of the impacts of climate change. But it is the least-developed countries and small island states on the front line of the crisis. For them climate change is a one-two punch. Not only do these countries have less money and administrative capacity to cope, but their very vulnerability to climate change increases the costs for them to access global financial markets for funding.

From 2008 to 2018, 20 of the most climate-vulnerable developing countries paid $40 billion to $62 billion more in interest payments on sovereign debt due to the risk of droughts, floods, and hurricanes. They continue to suffer each time a new disaster hits, and they lack the resources to build back better.

Developed countries have a moral imperative to support them. But it is also in the developed world’s self-interest to do so.

Unavoidable impacts. Scientists go out of their way to avoid exaggeration, but it is beyond question that hurricanes, droughts, heat waves, and floods are becoming more serious and more frequent. As a result, millions of people don’t have enough food and fresh water. All of these problems get catastrophically worse if average world temperatures rise 1.5 degrees Celsius above pre-industrial levels, and the world is already teetering toward a 1.1 degrees Celsius increase.

Security and intelligence agencies around the world have said for years that a volatile climate is a driver of conflict and instability. More recently, financial regulators and investors have warned that climate impacts threaten the global financial system. Without a fast-tracked global effort on the scale of the Apollo program to reduce carbon emissions and adapt to the changes that are already baked in, the world will be a more frightening place.

Developing countries have been aware of this problem for decades. The negotiating group of Small Island Developing States introduced the concept of loss and damage in the 1990s when it became clear that some amount of sea level rise would be unavoidable. There is no universally accepted definition of loss and damage, but generally it refers to the costs related to climate impacts that cannot be avoided through mitigation or adaptation measures.

What can be done? Loss and damage has since become one of the most hotly contested issues in global climate negotiations. Developed countries, including the United States and European Union member states, have pushed back against any debate on loss and damage out of concern that acknowledging the problem would quickly lead to claims of legal liability and compensation owed to developing countries.

While these concerns deserve most of the blame for sluggish progress on the loss/damage front, there is also an accounting problem. It is not clear how to calculate the cost of non-economic damages, like loss of cultural heritage or indeed of entire territories or livelihoods. There is the growing risk that irreversible tipping points might be breached—for example a change to the Gulf Stream or a dieback of the Amazon forests. Were either of those events to happen, the costs would be impossible to measure. There is the further complication that loss and damage is a domestic issue as well as an international one. Rich countries have vulnerable populations as well, and most are not being protected.

As a result, there has been bitter debate and only modest progress. The Warsaw International Mechanism was set up in 2013 to “promote the implementation of approaches to loss and damage,” but its mandate is vaguevague, and it lacks teeth. The landmark Paris Climate Agreement in 2015 also recognized the importance of “averting, minimizing, and addressing loss and damage associated with the adverse effects of climate change,” but didn’t offer any guidance on how to do that. The Santiago Expert Network was established in 2019 to catalyze technical assistance for developing countries, but so far it is just a website.

There are unanswered questions about how to measure loss and damage and how much new money is needed. But the fundamental problem is that the cost of climate impacts is beginning to exceed the ability of developing countries to pay, and this will only get worse. Adaptation efforts, while aimed at minimizing loss and damage, are growing but are clearly not enough; only about one quarter of climate finance currently goes to helping countries adapt and only a fraction of that reaches the least developed nations. Disaster risk finance and humanitarian response are part of the solution, but these are already falling short and needs are growing especially in light of COVID-19 and the war in Ukraine. The Horn of Africa for example is facing the possibility of its worst food crisis in 30 years.

The politics of climate risk shifted at the most recent negotiations in Glasgow last year, and developed countries engaged more constructively on loss and damage. It was mentioned in the High Ambition Coalition leader’s statement, which was signed by the United States, Germany, Canada, and other developed countries, and a commitment was made to advance the Santiago Expert Network. This was partly due to the unprecedented levels of devastation seen around the world, but also to broader frustrations about inequalities in the global pandemic response and international development in general. However, while the largest negotiating bloc of developing countries called to raise new money to pay for loss and damage, developed countries resisted. The compromise was to launch a three-year “Glasgow Dialogue” to discuss financing options, but unsurprisingly developing countries were not satisfied. Their public frustration made clear that the negotiations could grind to a halt unless an agreement is reached.

The benefits of effective action. Major economies have a lot to gain from putting serious offers on the table. For a start, finance for loss and damage would have tangible security benefits. There is a significant overlap between countries that are most vulnerable to climate impacts and those that are at high risk of conflict. These include countries in Africa, the Middle East, and the Caribbean, where stability is a strategic interest for the world’s major powers. Instability can lead to price shocks for food and raw materials, which given interconnected supply chains would become an economic security problem for developed countries. As the US government has itself recognized, the lack of resources needed to manage climate disasters could also lead to sudden and large unplanned movements of people, which can increase geopolitical tensions. Food and water scarcity driven by climate change could be a factor behind increased support for extremist groups.

The fact that loss and damage has become a central negotiating ask for developing countries also means that finding a solution is now essential for maintaining faith in the multilateral process, which is already under threat given the war in Ukraine and the pandemic. Failure to meet developing countries’ expectations on loss and damage will reduce the incentives for cooperation on a wide range of issues, including trade and mitigation.

Developed countries can also learn from deeper cooperation with developing countries. No country in the world has an adequate set of policy responses to physical climate risk. The United States, for example, has been warned that it spends so much money recovering from disasters that its sovereign credit rating could eventually be at risk. After unprecedented flooding last summer, the German government’s only option was to approve a $32 billion reconstruction fund. Poor, highly vulnerable countries have been learning how to efficiently minimize the damage from disasters for decades, without the benefit of large public budgets. Lending financial and technical support could offer important lessons for providers as well.

Major economies need to think creatively about near-term solutions. To start, they should make clear that the aim of the Glasgow Dialogue is to rally significant finance by 2024, and they should consider establishing an international fund dedicated to loss and damage. Grants could come from a range of sources, including multilateral development banks and the private sector. There should be a roadmap for achieving that goal, agreement on a definition of what counts as loss and damage, and an assessment of existing needs and resources. The V20, a coalition of vulnerable nations, plan to pilot test a new funding facility that could provide a model.

In the meantime, the big emitters could give money and technical assistance directly to vulnerable countries through national funds like the mechanism being planned in Bangladesh. Money could be raised through a tax on fossil fuel producers or financial transactions. The International Monetary Fund is launching a Resilience and Sustainability Trust that could be a game-changer given its investment value of $50 billion, but no one knows exactly what it will do yet. In the meantime, developed countries should continue to scale up their disaster response and humanitarian assistance, as well as improving insurance pooling and early warning systems.

Realistically, if the world does not get better at managing risks and building resilience, there will never be enough money for loss and damage. Solving the problem will ultimately require a new global framework for development and human security with climate change as a central pillar. That will have to be based on better climate risk assessments, climate-proof infrastructure, insurance mechanisms, and early warning systems, so that vulnerable communities everywhere are protected. But coming up with a short term offer on loss and damage finance will keep the window open for long-term fixes.

Developed countries are right to question why some major emitters that have seen breakneck economic growth in recent decades enabled by fossil fuels, like China, are not facing the same pressure to contribute. Fossil fuel exporters will increasingly argue that they deserve compensation for lost revenue. These issues need to be hashed out. But that should not prevent the G7 and other rich countries from acting, as they have much to gain from leadership. Climate change has hard security consequences but no hard security solutions. Throwing vulnerable countries a lifeline when disasters strike and helping them build resilience to future shocks is the only real option. It also happens to be a cost-effective investment in peace and stability at a time when the world is in desperate need of both.