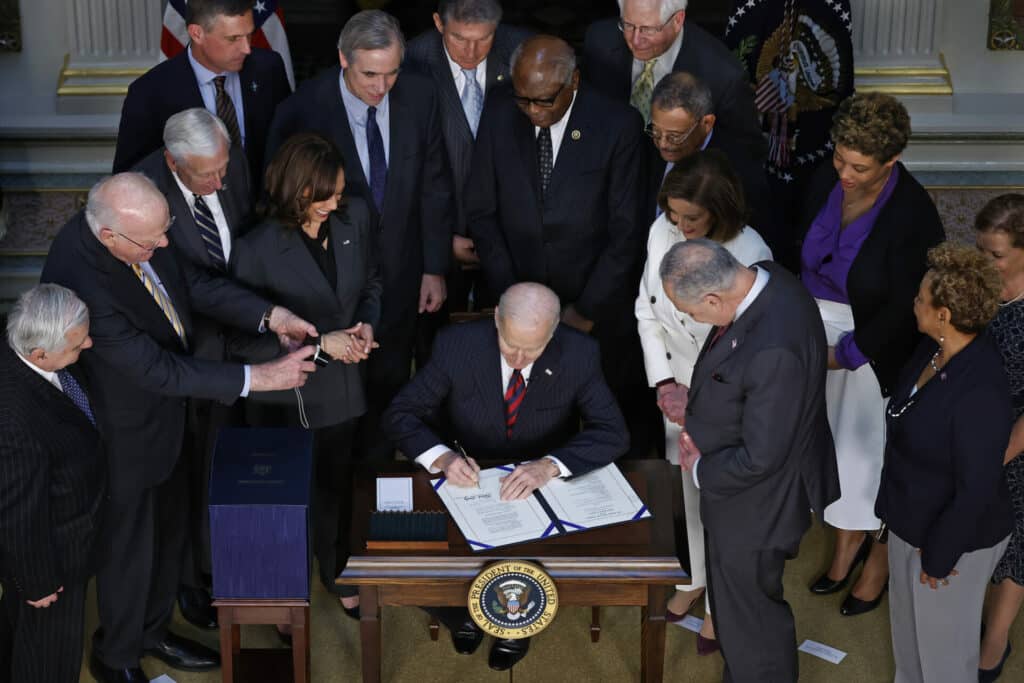 President Joe Biden is joined by Vice President Kamala Harris, Office of Management and Budget acting Director Shalanda Young and congressional leaders as he signs the “Consolidated Appropriations Act” on March 15, 2022. The act will fund the federal government through September 2022 and provide more than $780 billion for the US military. (Photo by Chip Somodevilla/Getty Images)

When I was on the professional staff of the House Armed Services Committee in the 1980s and 1990s, we always started our annual budget reviews with a threat assessment. Our military leaders would come to the committee, present their views of the Soviet threat, and outline the weapons and forces they believed they needed to counter the threat. We would then proceed to mark up a budget based on that assessment.

That changed after the collapse of the Warsaw Pact and then the Soviet Union. For several years, the administration and our military leaders were confused about the threat. They couldn’t quite decide what it was, and what was needed to counter it. Some factions of the government insisted that this was all a clever ploy. Then-Deputy Director of the CIA Robert Gates famously argued that the Soviet reforms initiated by then-Secretary General Mikhail Gorbachev were merely “breathing space” before a “further increase in Soviet military power and political influence.”

In fact, when Donald Rumsfeld became secretary of defense in 2001, he embraced existential uncertainty. He shifted the Pentagon from threat-based budgeting to a capabilities-based budgeting. That is, we would procure weapons based on the kind of capabilities we could deploy, rather than whether they were specifically needed at that moment to counter a particular threat. Preparing for uncertainty became the procurement mantra.

That was always a terrible budgeting strategy and remains so today. Technically, the Pentagon insists it matches each weapon system to a defined threat, but it would be more accurate to describe present planning as based on a hybrid of the two. The tilt toward building capabilities rather than threat-based forces increases with the exaggerated estimates of the threats we face.

The clearest example of this strategy of exaggerated threat estimation is the 20 years of wars and massive military deployments in the failed “War on Terror.” As it became clear our wars had created more chaos than they cured, and that the threat from terrorist groups was localized, relatively confined, and better handled by regional governments than US combat troops, emphasis in the Trump administration shifted to a different threat: “great power conflict.” This resonated powerfully among Washington experts, defense contractors, and government officials. While not without some truth, once again, the threats are vastly exaggerated.

Today’s Russia clearly does represent a significant military threat to its neighbors and to Europe and America. By virtue of its nuclear arsenal alone it is capable of destroying completely any country it chooses to target. With its conventional capabilities, Putin clearly threatens his neighbors, as the war in Ukraine tragically demonstrates. We do need military forces and military aid to defeat Putin’s brutal invasion.

But it’s clear we have also overestimated Russia’s conventional military capabilities and underestimated the ability of countries like Ukraine to counter the Russian force. We focused on Russian superiority over Ukraine in weapons systems and massed forces, underestimating morale, leadership, and the impact of corruption on military effectiveness.

Nuclear reactors in a war zone: A new type of weapon?

“Russia did not expect to fight a high-intensity war in Ukraine and bet on a quick collapse of the Ukrainian state and military,” International Institute for Strategic Studies fellow Franz-Stefan Gady writes. “As a result, Russian forces were utterly unprepared when they met stiff Ukrainian resistance, which effectively exploited Russia’s flawed concept of operations in the initial phase of the war.” While forecasting wartime military performance is notoriously difficult, analysts and government officials clearly tilted heavily toward worst-case assessments.

Does the same apply to China? I think it does. Every weapon in the arsenal is now justified by claims it can help counter China. But how much do we really need? Does China, in turn, see our deployments as threats that they must counter? And what are we countering them from doing? Is this about preventing them from attacking Los Angeles, or containing China to areas just a few hundreds of miles from its own shores?

As Duke University Professor Bruce Jentleson bluntly states, “The China threat is being inflated in ways that, as with the Soviet threat in the Cold War and terrorism post-9/11, are counterproductive for foreign-policy strategy and distort domestic politics in dangerous ways.”

Sullivan nailed it. That is exactly the right threat assessment. China is part of the challenges we face, but its competition with America is primarily economic, political, and ideological. Its military, apart from its nuclear force, is a continental one, not a global threat. It lacks the ability to project its power much further than its territorial waters. Biden’s campaign mantra that we had to rebuild at home in order to compete effectively globally was correct.

The administration just hasn’t done it. After an initial burst of attention and resources directed to the pandemic, the economy, and climate, the overwhelming response of the administration to global challenges has been pouring money into new weapons systems. Restoring American partnerships and leadership has morphed into dubious deals with dictators in the name of regional stability, as the president’s recent Middle East trip so sadly illustrates. China has become, as the Soviet Union before it, the go-to threat to justify every conceivable nuclear and conventional weapon system and program, as just about any Congressional speech in favor of the current whopping $850 Billion defense authorization bill demonstrates. America’s defense budget, as Jessica Mathews brilliantly documents, is “indefensible.”

How to host a refugee, spot fake war images, say “welcome” in Ukrainian, and more

China’s nuclear weapons programs are a case in point. China is, indeed, building new systems. But they are doing so largely in response to a US build-up of new offensive and defensive systems. As I wrote last year, “China is chasing the United States, not the other way around.” It fears its minimum nuclear deterrent force is now at risk from US first-strike weapons and future layered, global missile interceptors. The way to address this is through negotiation to freeze and reduce both sides’ arsenals, not the new nuclear arms race now emerging.

We must face the China challenge clearly and honestly. China is a brutal, totalitarian nation. Few Americans would like to live there. It is a threat to its own population and, in many ways, to its neighbors. But the threat is not primarily military. It cannot be countered primarily by military systems. Its regional influence cannot be countered by systems deployed thousands of miles from America’s borders in a futile attempt to maintain a global reach achieved during 20th century wars and now unnecessary for the defense of America—and enormously expensive to maintain.

Biden and Sullivan understood this when they came to office. But they have retreated, beset by challenges and seduced by the illusion of easy military solutions offered by contractors and consultants in and out of government. They have tactically decided not to buck the power of the military-industrial-congressional complex that dominates national security policy in Washington.

This is entirely understandable. It would take a major commitment of political capital to go against this powerful tide. With so much else to do, with so few allies in Congress, with a need to look tough and in command, why fight it?

This is a short-term choice with major long-term consequences. While the new commitments to the climate crisis and health care in the “Inflation Reduction Act of 2022” are a notable advance, these funds are dwarfed by the jump in Pentagon spending over the past six years. By not rebalancing priorities now, by exaggerating the Chinese military threat, Biden is increasing the odds that we may stumble into a major military confrontation later. One that wiser policies and honest threat assessments could avoid entirely.

The main threat to America may indeed be uncertainty. But it is an uncertainty we inflict on ourselves, not one posed by a foreign challenger.